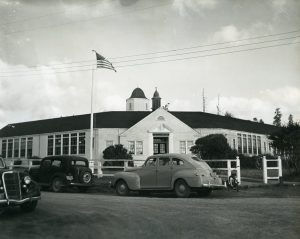 One of the big stories covered by the Mendocino Beacon 88 years ago this week was the election requesting the passage of bonds to rebuild Mendocino’s grammar school. The “old school,” which had been constructed in 1885, had burned in December 1929. The election was held on March 3, 1930.

No lives were lost in the December fire of 1929, although Arthur Lemos had a bad fall while climbing down from the roof! As reported in the Beacon, the fire had started in a portion of the building which was particularly difficult to access. The fire had smoldered for some time before it was noticed on a Tuesday afternoon. Students and teachers had returned to their classrooms after the mid-day break, around 1:00 p.m.. Smoke was coming out of a wall in Miss Chambers’ room. Principal Nicks directed one of the boys to “turn in the alarm” while he and his staff of teachers got the children, formed in lines, safely out of the building.

It was later determined that an opening in a chimney flue had allowed for the passage of a spark or cinder, normally confined to the bricks, to reach a wood surface between the ceiling and the roof. The enclosed space between roof and ceiling made for a tricky spot to fight the fire. From inside the building, the height of its ceilings also made it difficult to reach the flames. The chemical engine had been hurried to the school building. At this point, Arthur Lemos and John Mendosa got up on the roof and cut about a dozen holes in it. The chemical fire retardant was sprayed through the holes, but smoke made finding the source of the fire too difficult to be effective. Water pressure was low; a hose was brought up from a hydrant at Lansing and Little Lake, but that effort came too late. A portion of the force from Fort Bragg and one of their engines also were called to the scene, but by the time they arrived only the walls of the school remained.

Once Principal Nicks made sure that the students and teachers were safe, he mounted an effort to salvage as many of the school’s furnishings as possible. Two pianos, seats and desks, were all rescued. By Thursday, classes were back in session in various locations around town. The supper room of the Masonic Hall housed Mrs. Eunice Tannlund’s classes. Miss Prentiss taught her classes in the Gospel Hall, diagonally across the street from the Masonic Hall. Miss Chambers’ 5th and 6th grades found themselves in the Foresters Hall, while the new manual training building at the High School became the temporary home to Mr. Nicks and the 7th and 8th grade students.

The School Board got busy and organized an election, held about five months after the stock market crashed. After some deliberation, $18,500 was agreed upon as the amount sufficient to fund the new school building. The design, submitted by architect Ivan C. Satterlee of the Davis-Pearce firm in Stockton, included a 5,000 gallon water tank. Mr. Satterlee had also designed an elementary school for the Fair Oaks District in Stockton in 1921. The new building would allow for the Big River School District’s present needs as well as for a future expansion in attendance. On February 22, 1930, a Beacon article noted that the structure “. . . will embrace up-to-date principles and provide the children with plenty of sunlight and general healthful conditions . . .”

A two-thirds majority was required for passage of the bonds. The results were published in the March 8 edition of the Beacon: the school bonds were carried by a vote of 176 to 52. That election resulted in the building of the “new” grammar school, which today is home to the Community Center of Mendocino.

Photo caption: View of the front entry of Mendocino Grammar School on the corner of School and Pine Streets, c. 1932. The tip of the 5000 gallon water tank can be seen above the roof.