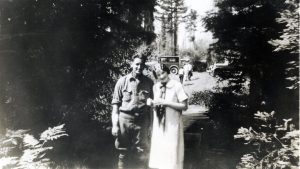 Delving into the past can often take one in unexpected directions. That has certainly been my experience conducting research at the Kelley House. This photograph of Gus and Alma Jacobs Mendosa represents an example. We think this was taken either some time before or shortly after their wedding, which occurred on June 29, 1927. It appears that the two of them attended an outing in the woods. At least four vehicles are parked in a clearing behind them and other attendees strolled away from them when the photograph was taken. Alma’s light dress suggests the spring or summer months and is of a style that didn’t come into favor until the 1920s. Gus is in a shirt with the sleeves rolled up. There’s a bandage on his right arm, and it even appears that Alma is holding a roll of bandages. Gus’s pant legs were wrapped in puttees below the knee. Perhaps Gus picked up the use of puttees while in uniform during the First World War, and found them helpful while hiking about the woods.

Gus was born into the locally well-known Mendosa family, in 1897. He had plenty of siblings and made a career of working in the family store as a salesman. Alma was born about ten years later, on April 29, 1907, into a family that immigrated to the United States. Her parents were from Germany, while the Mendosa parents came from the Azores. The Jacobs family bought land which they farmed. Alma had two sisters, Maria and Johanna, and a brother, Ingwer (named after their father). Alma’s given name was Engeline — a fact new to some of us! One wonders if Alma just didn’t like the name or if it was easier to use Alma, her middle name, which would have less chance of being mispronounced by English speakers.

Alma graduated from Mendocino High School in 1925 and continued her education at the Humboldt State Teachers College in Arcata. Her teaching career was briefly discussed in the December 10, 2015, issue of the Mendocino Beacon as a Kelley House Calendar “History Mystery.” It was no mystery, however, that Gus and Alma enjoyed many years together. Their home at 44501 Little Lake Road, on the corner of Blair Street in east Mendocino, was built for them by Gus’s brother, Frank. From the many photographs in the archives, it appears that they were fond of automobiles, or at least of recording them with their camera. They seemed to have led full lives as the years went by and the car models changed. Alma’s teaching meant that her life touched those of many students. Alma sang in the choir of the Presbyterian Church and served on their Board of Trustees as secretary. She was honored with the title of “Grand Marshall” for the 1991 Fourth of July parade.

I’m curious about the photograph taken on a bright day back in the 1920s: were Gus and Alma already married when it was taken? They both appear to be happy. Was this a planned exercise in learning first aid, done after the War, with Gus as a “volunteer victim?” The bandage doesn’t look terribly complicated. Perhaps Gus had actually been hurt that day, and was now fine under the ministrations of nurse Alma. It would be sheer speculation, but one might even believe that the spark of their relationship began on the day the photograph was taken. The photograph was donated to the Kelley House Museum by their niece, Jeanette Hansen. I telephoned Jeanette to confirm Alma’s given name. Next time, I’ll ask her about the bandage incident, if incident it was.