Long before ‘Pirates of the Caribbean’ 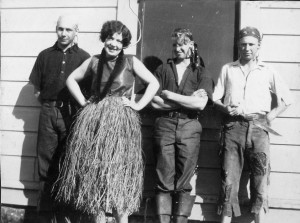 splashed across the silver screen, another bunch of swashbucklers captured the imagination of Mendocino: Hawaiian love pirates. Staged by Mendocino High School’s Glee Club in March of 1929, “Love Pirates of Hawaii” was an operetta in two acts set in the garden of a girls’ seminary school in Hawaii. It featured alluring young women, U.S. Navy officers disguised as pirates in order to visit them, and—just to liven things up—real pirates bent on abducting the headmistress, Miss Primer. Kind of a mixture of “Peter Pan,” “Madame Butterfly,” and Presbyterianism.

With a chorus of native Hawaiian girls and a chorus of pirates, there were plenty of parts to go around, but the coveted lead roles went to Evelyn Bowman as Dorothy Dear, the love object of Lieutenant Billy, played by the handsome Donald Philbrick. Frank Valentine took a star turn as the pirate chief who was (inexplicably) in love with Miss Primer, a part “acted with admirable dignity by Jane Cleary,” according to the 1929 yearbook. The set was built by Mr. Rossman, the science teacher and football coach, and was said to have “looked very realistic from the audience.”

No less important in creating the exotic atmosphere were the supporting actors seen in the photograph here: (L-R) Swante Johnson, Iris Martin, Forrest MacDonald, and Raymond (Clair) Valentine, Frank’s younger brother. As can be seen by her grass skirt, Iris played a native Hawaiian student, Lehua, who danced, sang, strummed the ukulele, and thereby “added a real Hawaiian touch,” according to the yearbook; her big number was “Simply Say Aloha.” The dashing young men were mateys from the pirate band, who harmonized on “My Castle in an Unknown Sea.” Spoiler Alert: love conquered all in this production, including the heart of Miss Primer.

You may wonder how this tropical confection found its way to Mendocino, but it came from not far away. “Love Pirates” was written by a well-known Bay Area composer–Otis M. Carrington–who was a music teacher at Sequoia High School in Redwood City. Recognizing that popular operettas of the day were too difficult for the high school set, he penned musicals they could handle. Starting in 1912 with “The Windmills of Holland,” Carrington churned out an operetta nearly every year with titles like “Polished Pebbles,” “Bits O’ Blarney,” and “Pioneer’s Papoose.” His almost 40 musicals were performed widely during the 20s and 30s. On his death in 1964 at the age of 80, the Christian Science Monitor called him, “the leader in the operatic field of educational music.” The New York Times noted that his operettas had enjoyed over 25,000 performances worldwide.

But did our young thespians prosper, poised as they were to graduate into the Depression? Kelley House archives reveal that MacDonald ranched his family’s spread along the Albion River and later was a livestock dealer in Ukiah. Valentine worked as a tree feller for the Union Lumber Company and served as fire chief for the Albion Fire Department. Voter registration records from Fort Bragg indicate that, in 1940, Johnson was an electrician and a Republican. Iris Martin married a Navy man, Richard Johnson, and by 1933 was living in Long Beach with an infant daughter. Perhaps she had been inspired by her magical time with Lieutenant Billy and the love pirates.