This story was the winning entry in the student category Short Story Contest: “Diamond in the Drink -or- How Did the Wedding Ring End up in the Kelley Pond?” Aftan is a 5th grade student. 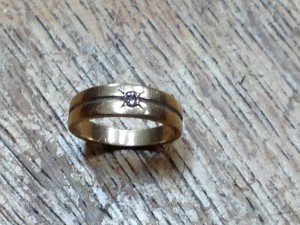 Fifty years ago in Mendocino town a beautiful young lady was getting married. Two big white, strong, gorgeous horses were pulling the special carriage they had hired. Thump, thump, thump was the sound that the hooves made on the road.

“Are we moving? Because I don’t see a change in my window,” said groom.

The man up front lashed the horses and their front legs jumped up and cloud of dust poofed behind. The lady turned her head and saw out the window a yellow house and a big round pond. They passed it and stepped out of the carriage onto the wooden step. They both looked at the grand hotel right in front of them.

“Umm, what type of hotel doesn’t take my bags to my room?! yelled the groom. The bride took all the bags up to his room, and all her bags up to her room, then she flopped onto her bed.

The groom came in her room and said, “Get up right now! Remember we are on a tight schedule.” He took a piece of paper out his pocket and read the following list:

“Okay, that is our schedule. Deal?” the groom said in a stern voice.

“Deal,” the bride said in a tired voice. She stepped out of bed slowly and walked out the door. She walked over to the ring shop to get a diamond ring for the groom. She had already bought him a wedding ring, but the groom didn’t like it at all and said “Get me a new one!”

“Let’s hope that I got the right size,” she thought to herself.

When she got back to the hotel, the groom said, “It’s time for our walk.” They were walking down the road holding hands and everything was peaceful. She could feel love between them and that’s why she wanted to marry him. The groom looked at his watch and looked at the bride and then said, “We are two minutes off schedule!”

They walked back to the pond and looked at the ducks and fed them bread. After a little while he turned and looked at her and said, “I love you and we are a couple seconds off schedule.” He grabbed her arm and ran down the hill and across the grass to the grand hotel.

At their table, she pulled out the chair for him and he sat down, then she sat down. When the waiter came, the groom ordered a large fancy expensive dinner for himself and a small bowl of rice for the bride.

“What’s taking so long? It’s been five minutes and I don’t see my food?” asked the groom. Minutes later five waiters came to them with big fancy trays of food for him and a small bowl of rice for the bride.

Two hours later, when the groom was all done, he pretended to forget his wallet and left the bride there to pay the check for $79.00. After a little while, she went up to her room and she was so glad to hop in bed and sleep. The bride decided to turn off her alarm and sleep in. But in the morning the groom woke up bright and early at the right time and hammered on her door to wake her up.

Today they were going to do their wedding rehearsal. She spent one hour calling every family member to come to their rehearsal. The bride also called lots of places to make sure that the wedding was perfect for the groom.

They were going to have their wedding next to the pond by the yellow house. There was a long line of cars outside of the gate. All the seats were filling up fast and time was ticking. Back at the hotel, the bride put on her dress and did her hair and makeup. Then the bride grabbed her bridal bouquet and started walking down the aisle. Dun, Dun, Du-dun; Dun, Dun, Du-dun the music played nicely.

“All right, all right, get on with what you need to say,” the groom said to the priest.

“Do you take this woman in love and death?”

“Yes, I do, blah blah, keep going,” said the groom, and the bride placed the ring on his finger.

“And do you take this man in love and death?,” asked the priest. The bride thought of all the times he bossed her around and was mean to her. She grabbed his arm and dragged the groom to the pond and pushed him in. The diamond ring was a bit big on him, so it slipped off his finger and sank to the bottom of the pond.

“I think, umm, no, I won’t marry you,” yelled the bride. While the bride was yelling, the diamond ring was sinking. She left him trying to reach the shore, went back to her room, packed her bags and called a cab. She returned to her home in San Francisco, found a new man who treated her with respect, and lived a wonderful, happy life. Meanwhile, the groom’s life didn’t go as he’d planned. When he returned to Springfield, Illinois, he lost all his money and home and lived the rest of his life on the street.

Fifty years later, the pond was being enlarged and the groom’s long-lost diamond ring emerged in a shovel-full of dirt. Now that is the story of the bossy groom’s ring.