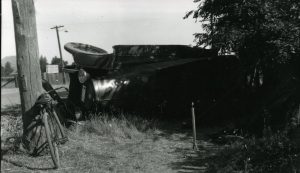 Recently, I went down to the basement archives in the Kelley House Museum, walked over to the subjects file cabinet, pulled out the drawer starting with the letter A and what did I find? Accidents!

I must say, Mendocino Coast residents in days gone by found some unusual ways to maim and kill themselves and these events got excellent newspaper coverage. Good old-fashioned transit accidents, be it horse, wagon, or auto, took many lives. Some stories were too gruesome to share here.

Some newspaper accident accounts actually had “EXTRA” in the headline. Three young men died in 1928 and a fourth was “dreadfully injured” in a “frightful  accident” after midnight on a bridge over Mitchell Creek. A tire blew out on a big Nash car: it went out of control, crashed through the railing and fell 30 feet down with “horrific force.”

Logging accidents abounded. In 1951, a photograph showed roots and a tree trunk. Under the oak was a man crushed to death along with a Caterpillar tractor. The logging operation had undermined the tree and it fell on the worker on Brushy Mountain, southeast of Fort Bragg. In 1937 a man was killed when a log rolled on him while working alone. The logger was crosscutting a log outside Camp 2 on the Ten Mile River. When a log is sawn in two, it is released from a tense position and it rolls.

In 1921, one logger was fishing while standing on a log jam in Big River. His foot slipped between two logs and a broken branch pierced his shoe and pinned his foot to the log. The next morning a train crew member on the logging railroad saw him and came to his rescue with a jackscrew.

Railroads were another source of peril. A worker on the Albion Lumber Company railroad lost a leg in a track construction accident. A boulder was being dynamited out of the way and unexpectedly sent rock flying 599 feet away and tore a man’s leg off. He survived. Another young man died after being crushed between two cars while he tried to uncouple them in 1908.

The lumber mill by Big River had its own dangers. In 1909 a man examining a sawdust conveyor belt had his clothing snag on a revolving shaft and he was wound up and thrown around the shaft. He grabbed a stanchion and his coworkers cut his smoking clothing off his body to release him. My first Kelley House Calendar written 15 years ago concerned the accidents listed in the records of Mendocino’s Dr. Preston.

How about accidents with an octopus? Twice, boys down on the rocks abalone fishing with friends were grabbed by an octopus and had to beat on the critters with abalone irons until they let go. Both octopuses had tentacles which stretched eight feet in diameter!

Even Hollywood got into the local accident scene. In 1947 when “Johnny Belinda” was being filmed locally, a helicopter was capturing scenes from above. Lew Ayres and Jane Wyman were in a horse-drawn buggy when the horses were spooked by the ‘copter and took off for the steep ocean bluff a quarter mile away, at full gallop. The first and second assistant directors took off on foot after the runaway buggy and brought it to a stop. Accident averted!

Best wishes for a safe and happy New Year from the Kelley House Museum. Visit us during the holidays, on Albion Street in Mendocino.