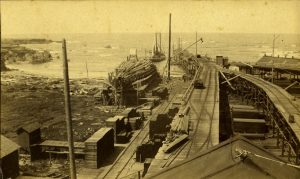 One of the strangest ocean-going crafts to grace the seas was built locally in Fort Bragg. Hundreds of feet long, brown, tapered at each end, it was sometimes mistaken for a whale or described as a giant “Perfecto” cigar.

Invented to bypass high shipping costs, the cigar raft was cheaper and safer transportation—at least in theory. Developed in the 1880s by Captain Hugh Roderick Robertson of New Brunswick, it took years of trial and error to perfect its design, during which time one raft drifted to West Africa, while another ruptured and became an East Coast maritime hazard. Undaunted, Robertson persisted, and the first cigar raft was towed safely to New York in 1888. It was given a hero’s welcome, having transported the equivalent of 40 schooners of timber.

In 1892, the Fort Bragg Lumber Company hired Robertson to build the first Pacific Coast cigar raft, causing considerable excitement for profit-hungry area mill owners. If successful, the raft could reduce shipping costs by 80%. Once processed at its destination, each thousand board feet of finished lumber would yield enough saleable waste to cover the bulk of the towing cost. Newspapers all along the Pacific waited eagerly for news from Fort Bragg, relayed to them by the Mendocino Beacon staff.

The first redwood raft was built in a hull-shaped “crib” of Robertson’s own design. Gradually, a wooden behemoth took shape under the capable hands of local men as a hoisting engine and boom placed whole logs around a central, stud-link towing chain. Using additional chains as thick as a man’s wrist, 1,200,000 board feet of logs, pilings, and railroad ties were cinched together every 12 feet of the raft’s 365 foot length. Red and green lights, rudders, a steering mechanism, and a pilothouse were added for safety.

In May of 1892, with a crowd in eager anticipation, the steamer Noyo began to tow the raft out to sea. “The raft started all right,” a Beacon reporter wrote. “The sea was very rough outside. The raft struck a rock when it was being towed out, and it broke in two in the middle. Part of it drifted on the rocks below Noyo [the town], and the other part was towed into the Noyo River.”

This account belies the public disappointment and tireless brute force it took to gather the broken pieces. For weeks after, logs were gathered up and towed back to Noyo, though some drifted far south and washed up on the beach below the Cliff House in San Francisco.

In July, 1892, Robertson was replaced by Fort Bragg local James Brett, who immediately began to build a new raft. As the San Francisco Call reported, “The success or failure of this raft is held to mean a boom or a killer for lumber rafting on the Pacific Coast.” With everything riding on the success of their efforts, Brett and his team aimed to triumph where the expert had failed. Were they successful? Well, that is the subject of next week’s Kelley House Calendar.