Power to the People

Home » Making History Blog » Power to the People
Previous Next

Power to the People 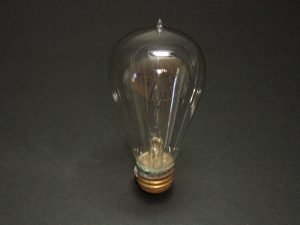 The first two dwellings illuminated by Edison’s improved light bulb in the fall of 1880 were the home of Francis Upton and Sarah Jordan’s Boarding House, both in Menlo Park, New Jersey.  Upton was an employee of Edison’s laboratory and the boarding house was home to some of Edison’s single male employees. As might be expected, gas stocks subsequently took a sharp downturn.

It took many more years before electricity and light bulbs came to Mendocino. In the January 1, 1893, Mendocino Beacon the following notice appeared:

“… within a few days a representative from an electric company will be in the midst of us to give an estimate and make some arrangements about putting in an electric light plant here. We would like to see our town illuminated by electricity, and let everyone interested in the welfare of this community do all in their power to encourage the enterprise.”

By the summer of 1896, a corporation had been formed under the name Mendocino Electric Company to bring electric light and power to Mendocino and the surrounding area. The principal investors were Dr. W. A. McCornack, Albert Brown, Charles Packard, L.A. Morgan, J. D. Johnson, Joshua Grindle and William Heeser.

Construction started on the new electric power generating plant on January 2, 1902. Located on the flat, north of the mill on Big River, it was 45′ x 45′ and 8′ deep. On the 26th of January it was tested for the first time. Two days later, the first public demonstration of a light fixture was held and, by the end of the month, the power lines had been run.  Then, on February 28th, the lights were turned on for the first time! There were 1300 lights and 5½ miles of wires. The night sky on the coast would never be same again (except, of course, for the occasional power outage, the first one coming only a year and half later, due to a forest fire).

Eugene Brown’s house on Main Street (now Panache Gallery) was the first wired for electric light illumination. Later, the original partners were bought out by Albert Brown; then the company was taken over by an eastern concern and eventually sold to PG&E.

The early rates for electric power were calculated per light. This is from a posting, possibly a public notice, found in the Kelley House archives, dated August 6, 1904:

Given that rate scale, I wondered what it would cost to light my house. In my home, there are 20 incandescent lights, counting the one in the refrigerator (which I’m convinced is always on). Applying the rate of 9-10 lights at $2.25 rate per month, it would cost me about $4.50 per month. Sounds good!  But wait, I didn’t adjust for inflation. So, at an average rate of 2.94% per year, my bill would be $116.09 a month, and that’s not taking into consideration all the other devices powered by electricity in our modern world, such as the T.V. and computer. I guess I shouldn’t complain about my monthly electric bill. It isn’t so bad after all!