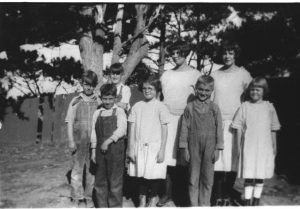 When created in 1865, the historic Little River school district had an average daily attendance of nine pupils. By 1874, a larger school building was needed and it was built on the east side of the road which became Highway 1, on the north side of School House Creek. In 1877, with a school population of 70, a new school was built on a site about one quarter of a mile south of the Little River Inn, on property donated by Silas Coombs. Lumber for the new building came from additional donations made by the mill at Little River and from its residents, who also provided the labor. At the time of teacher Mr. B. F. Higgins’ tenure, as reported in the Mendocino Beacon on June 1, 1878, of the 71 enrollees, 21 were in the first grade.

By 1883, attendance had grown to 103 students. Mr. Higgins was followed by Mr. Preston Johnson in 1881; Josie Van Damme in 1889 and even later by Nannie Flood Escola, Myrtle Eglin, Eileen Dillingham Whitehead and Madeline Haarby. Perhaps mercifully in some ways, attendance began to drop in the 1890s. People were moving away, and by 1924, at the time this photograph was taken, there were eight students.

What happened to each of them? Beginning with the back row, left to right, Robert M. Reynolds (1914-1987) lived in Cuffey’s Cove in 1920. Robert’s father worked as a laborer in the lumber industry. His family moved to Martinez by 1930. Robert became a teacher for a time, married Elizabeth M. Hazelton from Fresno, and served with the U.S. Army during World War II.

Twins, Cora and Margaret Coombs, the tall girls in back, were born October 19, 1911. Both Cora and Margaret attended San Francisco State Teachers’ College, in the mid-1930s. Cora married Ole Hervilla in 1938. Margaret married Dean Creath in 1945, and helped him run the Seafoam Lodge, south of Buckhorn Cove. Margaret died before her twin, passing away in 1993; Cora followed her in 1996.

Wayne Wilsey (1915-1999) was a first cousin to the girl in the front row, wearing glasses. Wayne’s father worked as a driver of trucks and tractors, likely for one of the mills. By 1930, the Wilsey family had moved to Fort Bragg. Wayne married a woman named Ora and lived in Eureka, earning his living as a metal worker. At the time of his death, Mr.Wilsey had been living in Redwood Valley.

Between cousins, stood William Hurley (1917-1984), who was born in Indiana as a namesake to his father. He was raised by his stepmother, Elizabeth, and the records give an impression that his family moved quite a lot, which was not unusual given conditions during the Great Depression. William joined the Army in the spring of 1945, and his spouse’s name was Fern.

Irene Mallory (1917-1999?) was the daughter of Cecil and Emily Eugenia Daniels Mallory. Irene must have loved the history all around her, as she became a historian and author responsible for the book “Little River’s Yesteryears, 1853-1965,” one of the sources for this article. Irene married Forrest Macdonald, whom she described in her own book as a “rancher, livestock dealer, and timber faller.”

Donald Bennett (1916-1998) grew up on his father’s poultry farm. After two years of high school, Donald was working as a bridge laborer in 1940. The final girl on the right in the front row is unidentified – a “history mystery.” As several of the people pictured here have living descendants, we are hopeful that she will be identified.