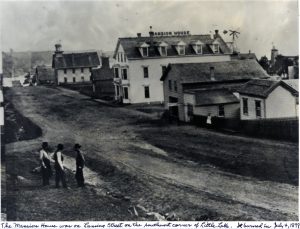 In exploring the archives of the Kelley House Museum, I discovered a list of business establishments existing in Mendocino in 1883. Here is a sample of the variety of commercial enterprises, which formed the business district 135 years ago, as listed in the Mendocino Beacon.

There were seven hotels in the town, one of which was “dry” serving no liquor. Four hotels had stables and two had restaurants, one with a liquor bar and one with a fruit and candy shop. There was one private boarding house, three general merchandise stores offering groceries, fancy goods, toys and fruit, plus by a drug store with a watchmaker and jewelry store attached, four cobblers, and one tailor. The newspaper made no mention of individual restaurants. Perhaps the assumption was that you ate at your hotel.

There was a musical instrument store, a saddlery and harness shop, a tin shop with stoves and hardware, two photographers, two millineries and dressmaker shops (milliners made and sold women’s hats), two barbers, one butcher shop, a brewery, a soda water factory and numerous saloons.

Two constables, two justices of the peace, and two notaries took care of the law. There was one broker, an auctioneer, an appraiser, and people who took care of the post office, money order office and telephone exchange.

Four carpenters and house builders were listed, along with two furniture builders. One wooden pump maker, two painters and paperhangers, one dentist, and four physicians were also available. Two Chinese stores and many Chinese wash houses (laundries) employed some of the Chinese community, which numbered in the hundreds.

It was estimated that there were about 1,000 inhabitants and over 100 dwellings in town, not counting employee cabins and the homes of Indians or Chinese. No mention was made of houses of ill repute that were also undoubtedly part of the community. Most bars doubled as bordellos offering “companionship for a price” in the upstairs rooms.

Two bands, a newspaper, two churches and a public school existed, along with fraternal organizations including the Masons, Odd Fellows, Native Sons and a dozen more. Mendocino was a bustling place 135 years ago.

In addition to the Beacon, the Kelley House Museum has other direct sources that form a picture of the town in its third decade. One of these is an 1884-1885 directory for the County of Mendocino, published by McKenney, which provides a narrative picture of the town:

A post, express and telegraph office; the second largest town in the county . . . Has a population of about 1,000 whose dependence is chiefly on the lumbering interest of the locality, which is carried on veryextensively. The Mansion House, kept by the genial and hospitable proprietor, A. T. Rogers, is the leading house of the place, and one of the finest in the county. Mr. Rogers and his assistants do all in their power to make it a home for all.

The Mansion House was built by Albert Rodgers (Rogers) on the southwest corner of Lansing and Little Lake Streets in the fall of 1882. Mr. Rogers operated the hotel for a short time before selling it to Joseph Lazarus. In December, three years later, a Beacon notice informed its readers that Frank Lazarus had purchased the hotel property from his brother Joseph. A fire consumed the three-story building on July 4, 1899, the second largest fire the town had seen. The Mansion House was never rebuilt.