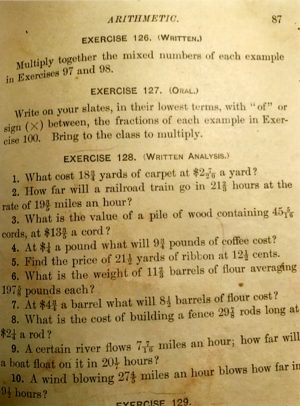 If you’ve ever been to the Kelley House Museum, you no doubt have seen the 150-year-old wedding dress on display in the front hall. The two-piece brown plaid taffeta jacket and skirt belonged to Phoebe Allen Marsan, who married John Peter Marsan in Kansas in the late 1860s. Their only child, David Allen Marsan, was born March 19, 1870, in Ossawatomie, Kansas. The young family headed out West, but Phoebe died along the way in Colorado Springs, Colorado, circa 1875. John Marsan and his young son located in Little River, the home of Phoebe’s maternal uncle, Isaiah Stevens, an original settler who owned the property where Stevenswood and the Glendeven Inn are located today. John Marsan set up a blacksmith shop there and David was raised in his great-uncle’s home.

Phoebe’s wedding dress is just one of several items in the Kelley House Museum collections with ties to the Marsan family. Another is a California Series textbook for “Advanced Arithmetic.” It is a wonderful window on the past for a multitude of reasons, not the least of which may be as an example of how much an eighth-grade graduate of the 1890s was expected to know and comprehend. It begs the question: how many of us could complete the exercises in the textbook — without a calculator? Students back then had some math chops!

On the front page of the book where the Preface was printed, a student wrote in pencil “April 9, 1893 Mr. D. A. Marsan, Teacher,” and below that “19 girls, 28 boys.” That’s a class of 37 students (see chapter on Addition). The following page provides the Table of Contents and here in the upper left corner was written in pencil “June 20, 1892 Mr. F. H. Brown, teacher — May finished.” The only person to have claimed the book in ink was apparently a student of “Mr. L. A. Gonsalves” who wrote that teacher’s name on the facing page. At least three teachers, all men, put this book to use. In its Preface, the State Board of Education wrote:

work a class carefully through it, making it familiar by frequent reviews, and

The book is filled with examples having practical applications. There are chapters on Bills, Weights and Measures, Partnership, Percentage, Profit and Loss, Commission, Insurance, Taxes, Stocks, Interest, Compound Interest, and so on. A brief look at Exercise 47, “Practical Work in Addition and Subtraction,” yields bits of historic information such as election results by counties, census enumerations of various ethnicities, costs and names of everyday items (what was a “chamber suit”?) Item number 38 on page 31 reads “If you live till the year 1922, how old will you be?”

David Marsan must have had an interest in the science of healing, perhaps derived from the experience of his mother’s early death when he was just five years old. Sometime in the midst of his teaching career, David Marsan began learning of medicine from Dr. William A. McCornack. He went on to study at the Cooper Medical College in San Francisco, which institution later formed the foundation of the Stanford University Medical School. He worked during his student summers at drugstores in both Mendocino and Fort Bragg. After Dr. Marsan completed his medical education, he eventually settled in Point Arena where his first wife, Ruth Bournes Marsan, had grown up.