Wreck of the “Frolic” Subject of Sunday Talk

Wreck of the “Frolic” Subject of Sunday Talk 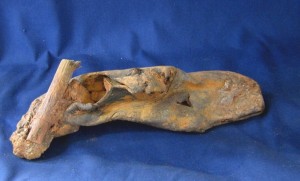 “A Dark & Stormy Night: Mendocino Coast Shipwrecks…” the current exhibit at the Kelley House, includes information on the first wreck known to have occurred only a few miles north. We refer, of course to the Frolic. To learn much more, plan to come to the Museum February 28 at 4 p.m. to spend a ‘Sunday Afternoon With . . . ‘ Robert Becker.

Becker is a veteran docent at the Point Cabrillo Lighthouse and will talk about what the San Francisco Maritime Museum called “the most significant shipwreck on the west coast” the 1850 wreck of the clipper ship Frolic. After a 44 day voyage of almost 6,000 miles from China the well-insured vessel was loaded with household goods destined for Gold Rush miners in San Francisco when it hit the rocks just north of where the Point Cabrillo Lighthouse now stands. The photograph is of a shoe, recovered from the wreck site several years ago, and is now part of the Kelley House Museum’s collection.

Becker will discuss the importance and significance of that event. The crew and officers survived in a small boat and sailed south to report the loss of the vessel, but what they reported led to the founding of Mendocino, its first mill “and the rest is history.”

The Kelley House staff and volunteers gathered information on hundreds of shipwrecks from Gualala to Westport to develop display panels full of interesting facts about maritime wrecks. There are artifacts to peruse and even objects that were aboard the Frolic when it met its end on the rocks. Shipwrecks on the coast led to the construction of the Point Cabrillo Lighthouse in later years.

There are astonishing photos of the shipping points on the Mendocino Coast. Some, like Little River, had rails that led directly to the ship. Others, such as a slide chute located between Gualala and Point Area, were named “Nip and Tuck,” due to the difficulty for a ship to enter, load and leave. Most wrecks did not occur out at sea, but close to land, due to the precarious nature of the landing points.

Anyone enjoying history will wish to attend Robert Becker’s presentation Sunday February 28 at 4 p.m. Donations of $7 from non-members and $5 from members are requested. Call (707) 937-5791 for more information or go to www.kelleyhousemuseum.org.