Wreck of the Coastal Steamer ‘Samoa’

Wreck of the Coastal Steamer ‘Samoa’ 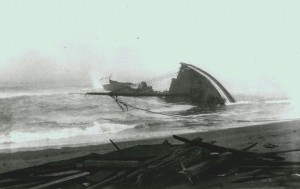 Falling apart at the seams? That’s what happened a little over a century ago to a coastal steamer belonging to the Caspar Lumber Company. The Samoa carried a crew of 21 men and 380,000 feet of lumber on the morning of January 28, 1913. She was making her usual run from Caspar to San Francisco through a thick blanket of fog. No GPS or even radar in those days. The Samoa hit the beach known as Ten-Mile, not far from the Point Reyes life-saving station. The captain ordered her whistle to be blown, as there was no time to lower the boats. The life-saving crew heard the whistle (good thing the ship had enough steam to keep up the whistle blowing) and came out into the early morning fog. They literally couldn’t see but a few feet in front of them.

According to the Beacon of February 1, 1913, there was quite a time affecting the rescue. A line was ‘shot’ 200 feet toward the Samoa, which was rapidly breaking up, and a ‘breeches buoy’ was rigged. If you’re not familiar with the rigging and use of a breeches buoy, you need look no further than the Mendocino Coast Model Railroad and Historical Society’s web page, link provided here: http://www.mendorailhistory.org/1_shipping/breeches_buoy.htm . The web page, in turn, features the ‘Kelley House Calendar’ article authored by Louis Hough and published on August 29, 2002. Essentially, a breeches buoy is a life-saving ring, rigged with multiple lines to a pulley system, used to carry persons from a deck (sinking) to a point of safety. Inside the ring, ‘breeches’ are attached. The person ‘rides’ inside the ring, wearing the ‘breeches’ as they are brought to shore or the deck of a safe vessel. Ingenious!

The Beacon article provides further information regarding the wreck of the Samoa. One can well imagine that the process of being brought to shore through the breakers, many of which were dangerously filling with lumber and debris from the ship, would soak the crew men to the skin. Once safe on the beach, the task was to get out of the wet clothes and into dry things. Here is where the wife of the captain at the Point Reyes life-saving station came into the story:

A couple of hours later a strange scene was being staged on the bleak
sands about the life-saving house. One by one the sailors came from
the station, each succeeding one looking more grotesque than the one
before him (Mendocino Beacon, February 1, 1913, 1:5).

Apparently, the captain’s wife gave out what spare clothing she had. By the time the 21st man emerged, he was obliged to wear a ‘calico skirt and faded blue shirtwaist.’ How ironic that the men were now able to put their clothes out in the sun to dry! Fog can certainly be unpredictable.

No lives were lost. The losses to the Caspar Lumber Company, which had purchased the Samoa from the Beadle Brothers in 1905, were estimated at $60,000. The seas took about 30 minutes to break up the steamer, whose floating parts were sighted, both north and south of the wreck, for days afterward. Further irony is that the Samoa was making her first round trip from Caspar to San Francisco, after having received a general overhauling.

For more fascinating details of shipwrecks, rigging, nautical charts, captains and their families, and the challenges of commercial shipping on the north coast, come to our current exhibit, “A Dark & Stormy Night: Mendocino Coast Shipwrecks.” The museum is open Fridays through Mondays, 11am to 3pm.