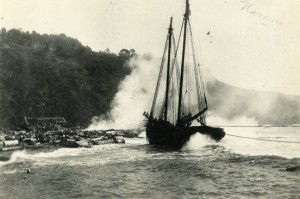 Since 1850, more than 160 vessels have met their fate along Mendocino’s rugged coastline while the shouts of drowning sailors and passengers have been heard above the roar of the surf. The most famous shipwreck was the Frolic, a Baltimore clipper ship bound for California from China. A former opium runner between Bombay and Hong Kong, the bulk of the Frolic’s cargo now consisted of silks, ceramics, lacquered ware and even a fabricated house that it loaded in Canton and was hoping to sell at greatly inflated prices in Gold Rush San Francisco. On a foggy night in July 1850, the Frolic strayed too close to a small unnamed cape north of Point Cabrillo and was flung against a rock by a swell, smashing off her rudder and tearing open the hull. The captain, Edward Faucon, abandoned ship just as the Frolic was being pounded by waves against a rock in relatively deep water. Two Chinese crewmen, a Lascar and three Malays remained aboard the ship. To this day, we don’t know if they survived or drowned.
It was this “Silk Ship” that brought the men who founded the lumber mills to Mendocino to log the giant trees. For decades following the wreck of the Frolic, it was cheaper to ship redwood by sea then it was to bring it out overland. Land routes were tortuous and often impassable. They could not accommodate the transportation of such heavy loads. Nonetheless, the coast of Mendocino was a treacherous place, most ports nothing more than a “dog-hole”, described because it was said that not even a dog could turn around in them. Hidden rocks, shallow reefs, dangerous undertows and deadly rip-currents were the ever present hazards. Even the relatively spacious cove at Mendocino was no port in a storm.
On December 11,1855, the schooner, Harriet, commanded by Captain Haley from San Francisco, went ashore on a Tuesday afternoon in the harbor of Mendocino. The vessel had been at anchor for a short time when the sea began rolling in to the harbor with such force that both cables holding the ship fast, broke. There was little or no wind but the vessel was driven into the breakers where she went to pieces within half an hour. Captain Haley, in attempting to jump from the ship to the rocks, fell into the ocean and was drowned. His son, Andrew, 18 years old, as well as the cook, were carried overboard and were lost
The worst disaster of the time was the loss of the brig Cabot commanded by John William Gage. It was a pleasant morning in April with light winds. Two vessels were at the moorings, one of which was loaded and ready for sea. A heavy swell was rolling in from the ocean, at times breaking at the entrance to the harbor. Captain David Lansing, harbormaster, who was in charge of shipping the lumber, hoisted the flag as a signal for the loaded vessel to proceed to sea. An attempt was made but with the wind failing, the ship began to drift and was brought back to the moorings.
The Cabot was outside waiting for an opportunity to enter the harbor. Captain Gage, seeing the flag and thinking it was a signal for him to enter, steered for the port. Upon arriving at the entrance, he saw that both moorings were occupied. He then endeavored to return to sea but drifted over to the shoals called “middle ground” where he dropped anchor. A crew from land, and also from the other vessels, was sent to the brig to assist in getting it out of difficulty. Just as they were about to the raise the anchor, an immense wave came in and turned the vessel bottom up. Those losing their lives numbered twelve, six from land, and six from the vessels. At that time, no one dared approach the capsized vessel in a boat so those who clung to the wreck were gradually drowned, their distressed cries lasting for a full hour. Captain Gage was saved.
The day of sail and steam are a thing of the past but the ships and their crews battling the dangerous coves of our coast provide an exciting chapter to our coastal history.
The Kelley House’s first exhibit for 2016 will be on the perilous times of sailing on the Redwood Coast. A Dark and Stormy Night: Mendocino Coast Shipwrecks opens on January 8 and will run through April 11. The museum is open Friday – Monday from 11:00 – 3:00. Stop by and read more about it but be sure to bring your life jacket.