When the 1920s Roared in Mendocino

When the 1920s Roared in Mendocino 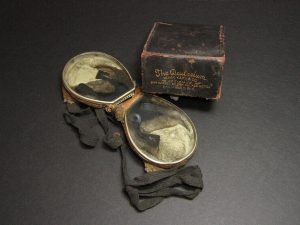 Recently, while researching something else, we came across a catalog record with a photograph of Elmer Strauss’ goggles, reportedly from his racing days at the Mendocino Race Track, built on what had been Heeser’s Ranch.  Mr. Elmer Strauss was no stranger to vehicles of many types.  Early in his career, he and George Daniels, both “town boys” were reported as having made the choice to work in San Francisco on the Market Street Railroad, in 1925 (Mendocino Beacon, August 29, 1925).  The article states that “Strauss is to be a motorman and Daniels a conductor on one of the Market St. car lines.”

Elmer Strauss returned, however, to the Mendocino coast, where he continued working in various capacities as an engineer on lumber company railroads.  He also married Harriett Claire Patton in the fall of 1927, in Ukiah.  The intriguing thing about Mr. Strauss’ goggles is whether or not they were used on Mendocino’s race track.  Might they have been used in his capacity as an engineer on the railroad belonging to the Mendocino Lumber Company at Boyle’s Camp?  Perhaps they were used under multiple conditions.  They certainly look well-worn today.

The Beacon published an account of the first race to have taken place on the track, specifically designed for auto racing, in the fall of 1921.  The automobile racetrack was constructed by the Apple Fair Association, so that the Fair’s programs could be extended to include the then new sport of auto racing, as well as the horse races.  As reported in 1921, the Fair Association “. . . constructed a three-quarter mile track on the western edge of town . . . . A grand stand has been constructed and other accommodations made for the crowd.”  These were the first auto races “held on the coast and they are being looked forward to with great interest” (Mendocino Beacon, October 22, 1921).

The following week, results of the first races were provided to the Beacon’s readership.  There were two races, one consisting of 25 laps, a distance of approximately 17 miles, and the second, held for entries of larger vehicles which amounted to a total distance of 25 miles.  Cars and their drivers were named: drivers Phil Gorman, Louis Disbrow (of Fort Bragg) and Billy Catherina raced their vehicles in the first race, which was won by Catherina in his Buick, with a time of 23 minutes, 8 seconds.  The second race had four entries: A. Andrier (of Fort Bragg), D.J. Brochier, W.A. Ford, Jr. and again, Billy Catherina.  Mr. Andrier in his Essex won that race, with Mr. Brochier in his Dodge coming in second place.  The winning time was 31 minutes, 3 seconds.

Elmer may not have driven in either of these inaugural races, but he was certainly in a position to have taken multiple turns around the track during its heyday.  The track is no more, along with the grandstands, but we still have Elmer Strauss’ goggles.