What’s in an Archive?

Home » Making History Blog » What’s in an Archive?
Previous Next

What’s in an Archive? 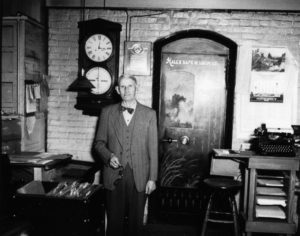 Do you have a box or two in the back of your closet or a file drawer filled with “stuff” that you may or may not go through before passing to the next world? That must have been what happened to Augie Heeser. Some of the things from his lifetime have found a home in the Kelley House Museum and archives.

August Alfred Heeser, son of William and Laura Heeser, was a person of some means and a man of business with the responsibility for carrying the torch of his father’s ambitions and accomplishments into the twentieth century. Most notably, he succeeded his father as publisher and editor of the Mendocino Beacon.

Let’s take a peek into Augie’s “stuff.” There are notices sent to him providing information on the exchange rates for gold and silver from around the globe. If you need to know the worth of Norwegian kroner or of Spanish pesetas, yen from Yokohama or of Australasian pounds sterling, in April of 1913 for instance, we have that information. The notices were sent by the Foreign Department of the “Wells Fargo Nevada National Bank of San Francisco.” Imagine someone today being willing to wait ten days for the updated rate of exchange! The bank printing the notices, which were actually “Quotations for Foreign Drafts,” advised their “correspondents” to “report to us if they do not receive rates at least once every ten days.”

Another folder replete with Mendocino history from Augie’s working days comes from the same archival box. These items have been filed and cataloged as a collection, but not individually. Not yet. This is why we welcome archive volunteers! The folder’s contents seem to involve notices submitted to the Beacon for publication, or requests for printing jobs. Items range from program information for the Mendocino High School production of “The Gypsy Rover,” an operetta in three acts, presented on April 3, 1925 at the I.O.O.F. Hall, to a change in Mr. A.E. Bishop’s Main Street business. Mr. Bishop altered the name of his establishment from the “National Ice Cream & Confectionery” to “Fishing Tackle, Ammunition, Ice Cream & Confectionery.” To reach him by telephone in 1928, one would dial 36. The G. R. Bunch establishment in Elk didn’t offer tackle and ammunition. It was known simply as “Acme Ice Cream & Confectionery.” In December 1928, Mrs. G.R. Bunch placed an order on a sheet of the Bunch stationery for 25 posters advertising the Druids Benefit Dance at Greenwood. The dance featured music by the Sequoian Orchestra.

Also available in the same folder are 8 ¼ inch by 5 ½ inch sheets of stationery from the “Hotel Mendocino, Champ and Gary, Proprietors.” Their slogan, printed at the bottom, was “We Will Make You Feel At Home.” At the opposite end of the communication spectrum, Trespass Notices made up a substantial part of the printing orders. Fifty of the following were requested, though it is not known by whom: “Notice – All persons are hereby warned that the privilege of picking Huckleberries on this land has been leased. No Trespassing – – Keep Off.” Finally, if you wanted to be beautiful while picking huckleberries, assuming you were not trespassing, you could go to Leona Campbell’s “Mendocino Beauty Parlor” in the Luiz Building on Main Street. The business card for this establishment, of which 500 were to be printed, stated that customers could come in for marcelling, paper curling, water waving, manicuring, shampooing and facials.

Photo caption: Augie Heeser in the Mendocino Beacon office. Behind him is a safe, which can be seen at today’s Honey & Ro boutique, 45062 Ukiah Street.