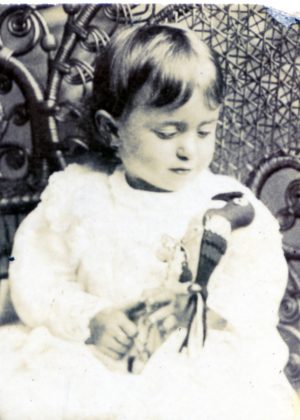 A little girl in a wicker chair holds a parrot. She is gazing down at the toy and dressed in a white, ruffled gown. Meet Hazel Packard Dennison, born on this day in 1897. She was the youngest of eight children who, along with her parents Charles Oscar and Hannah Cline Packard, made up one of the better known families of historic Mendocino.

The original photograph, one of a series of three cut into a strip not unlike those that came out of the old-fashioned photo booths we used to see at carnivals, in a mall, or other gathering places, measured only one inch by three-fourths of an inch. Others like it are in the Packard family folder from our archives, including images of Hazel’s mother, sisters Lizzie and Hannah May, and brother, Charles Wilfred, known as “Tuffy.” The same wicker chair shows up in each of the photographs here mentioned, but no other children have the parrot “prop” or toy. Hazel appears to be about two to three years old.

By the time of Hazel’s birth, the C.O. Packard family was well established in Mendocino. Mr. Packard is thought to have arrived in here in 1869, and began working in the woods. He worked at the Hoak Ranch out in Comptche. At some point, he became known to Dr. William McCornack, who took him on as a sort of pharmaceutical apprentice, according to a 1970 interview with Hazel.

Mr. C. O. Packard, and his brother, Justin, both possessed entrepreneurial spirits. They became quite involved in the life of the town and did well with their purchase of the drugstore, located on Main Street. Being the youngest, Hazel would have missed out on the early years, but would also have benefitted from her family’s success story. Hazel, along with four other little girls, charmed parade viewers on the 4th of July in 1902. They were dressed all in white, with wings on their backs, portraying angels riding on the back of a wagon decorated with greens. It was not all good times, however, as Hazel’s older sister, Hannah May died of tuberculosis in 1915, at about the time that Hazel would have graduated from high school.

After the death of Mr. Packard in 1917, his widow moved with her daughters Myrtle and Hazel to Santa Rosa, where they lived with Mrs. Packard’s brother, the girls’ Uncle Henry. A few years later, Mrs. Packard and Hazel had moved to San Francisco, where, according to the federal census of 1920, they were living on Cole Street, along with a brother, George. Hazel worked as a bookkeeper in a branch of the publishing industry, while George spent his time as an iron worker in the ship yards. About a year later, Hazel married Earl M. Dennison. Mr. Dennison had been born in 1884, making him thirteen years older than his wife. Of his career or their marriage, little is known. There were no children.

Hazel spent much of her life in San Francisco and nearly as many years in Oregon. When she began corresponding with Dorothy Bear and Beth Stebbins, co-founders of what is now the Kelley House Museum, she wrote from Oregon. Bear and Stebbins collected the foundations of the archives prior to the invention of the internet. They contacted members of Mendocino’s early families, asking questions regarding lineages, properties purchased, businesses owned, relationships built. In February, 1974, Hazel visited Mendocino from her home in Beaverton. While here, she stayed in the house where she was born, on the corner of Little Lake and Kasten Streets. Her letters to Bear and Stebbins are the source of bits of information that would otherwise be lost — such as Hazel’s recollection that the Perley Maxwell house was the only other one besides the Packard home to enjoy the convenience of acetylene gas lighting. Or that the ice for ice cream had to come up on the boats from the south. Hazel Packard Dennison died on December 4, 1990, at the age of 93. She is buried in Mendocino’s Evergreen Cemetery.