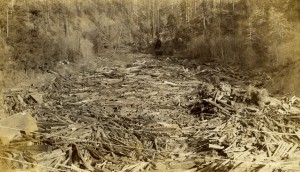 According to the website “weather-warehouse.com” which provides historic weather data, the total precipitation for 1914 in Fort Bragg was 17.91 inches. During that year, the maximum precipitation in a single 24 hour period was 2.51 inches. The weather station from which these data were derived is noted as “Fort Bragg 5 N”.

That information seems odd, however, because according to a very reliable local historian, Denise Stanley Stenberg, that would mean half of the total rainfall that year fell in one storm. In her 2009 book, Glen Blair, the End of the Line, published by the Fort Bragg-Mendocino Coast Historical Society, a pair of storms in January of that year wreaked havoc on the Coast.

In the first [storm], it rained nine inches in 36 hours, and bridges,
roads and all communications services were severely damaged. After the second,
it took two weeks of round-the-clock repairs to get the railroads in Pudding Creek
and Noyo in shape to run (Stenberg 2009:32).

In January 1914, as shown in the photograph, Pudding Creek was jammed with logs, buildings and trees, after a flood. The dam across Pudding Creek, built by the Union Lumber Company to impound water for a log pond, was seriously damaged. A continuous downpour of rain for a month reached a climax when super saturated hillsides came down and rivers overflowed.

Our photograph depicts the extent of the damage well. In the background, at the edge of the creek, next to a still standing tree, two figures may be seen, standing close to the bank. One structure on the opposite bank appears to have weathered the flood. In the lower left quadrant of the photograph, two uprooted buildings are evident. A stretch of railroad tracks are visible on the right hand side of the photograph; and there are at least three other persons visible, walking along the tracks. Water will always find its way downhill.

Imagine a closure of the ‘Shoreline Highway’ lasting for two weeks! Everyone would be lined up on Highway 20 to reach their southbound destinations. The phenomenon known as El Niño may not have been named back then, but there was plenty of rain the first month of 1914.