Big Timber, Big Party, and Too Many Pigeons

Big Timber, Big Party, and Too Many Pigeons 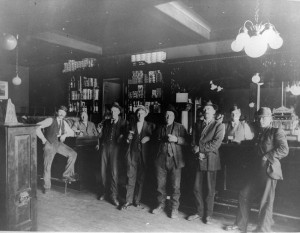 To make a historian’s heart go “pitty-pat” hand her a 104-year-old book called “History of Mendocino and Lake Counties, California with Biographical Sketches.” Written by A.O. Carpenter and P.H. Millberry, it comprises 156 pages of history and 887 pages of biographies of 600 citizens who paid to have their stories included.

While every man, and a few women, thought they were the most important citizens of their county, the bios today seem rather ho-hum unless one or two of the notables were your own ancestors. The history section has some interesting nuggets that I mined for your reading pleasure.

The Rockport mill, begun in 1877, had a wharf with a railroad track ¾ mile long. The last 275 feet were on a steel wire suspension bridge to an offshore island loading point. Supported by seven all-steel wire cables, it was one of the first suspension bridges in the west and lasted about ten years.

When the mill at the mouth of the Navarro River ran into financial difficulties in the 1890s, including $500,000 of debt, the employees took possession of the company store and paid themselves back wages straight out of the cash register. After Dr. McCornack opened a hospital above his Mendocino drugstore in 1887, the lumber mill on Big River assessed employees 90 cents each month for their right to medical care at the hospital.

Street lights for Mendocino City (NEVER called a village) were planned in 1895. It was reported that redwood conduits would be used to carry electric lines and water underground since they were deemed more durable than iron or steel pipe, and more convenient to repair.

In 1909 Mendocino City went “dry” and banned the sale of alcoholic beverages, with the result that prohibition lasted ten years longer here than in the rest of the country. Mendocino newspaper headlines declared, “Ban on Saloons Will Last for All Time!” and “Mendocino to Have Giant Party as 14 Saloons Dispense with their Stock of Liquid Refreshments!”

The incorporated areas of the county were permitted to hold “wet or dry” elections, with Fort Bragg, Ukiah, and Willits voting “wet”. Point Arena (with a population of 476 and boasting nine saloons) incorporated in 1908, most likely in order to escape the possibility of a “dry vote” in the county. Those in Mendocino who refused to give up their Saturday night drink were forced to hitch up horse and buggy for the long haul to Fort Bragg or Point Arena.
Finally, in August 1913, a limb 18 inches in diameter broke from a tree due to the weight of live pigeons sitting on it.

Had enough yet? If not, “History of Mendocino and Lake Counties is full of local trivia, historical information, and settler stories. It can be read at the Kelley House research office.