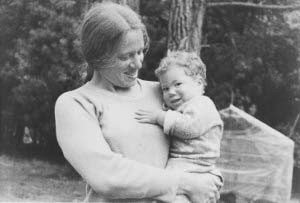 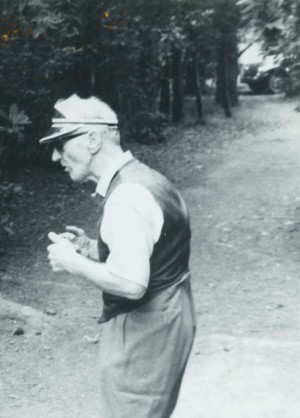 Sometimes I thought of him as Prince Val and at other times, Chairman Val. He was a complicated man, dictatorial and opinionated yet generous and surprisingly open minded. Living on Val’s land was a unique and magical time in my life.

I moved to Val Pawek’s land in September, 1970. My boyfriend Wayne and I had come to Mendocino to get away from the Bay Area for a few days and to visit a friend from Berkeley who had recently moved to the coast. I called our friend but instead of reaching him, spoke to a charming man with a German accent. He told me our friend was not around, but we were welcome to come to his home for a visit. By the end of the evening Val had invited us to live on his land, rent free. Enchanted by the Pawek Ranch and Val himself, we accepted without hesitation. It was as simple as that.

Val was 69 years old when I met him. He had moved to the United States in 1923, leaving behind Austria and his training as a gunsmith in the family business. Because he had suffered a gunshot wound to an eye as a young man of 19 he wore sunglasses and a green visor, outside and in. He was a small, vigorous man with work-worn hands, a bad back and a strong work ethic. He was precise, orderly, frugal and methodical. He went about his daily chores wearing black knee-high rubber boots, loose fitting work pants, a shirt with rolled up sleeves and a vest where he placed his pocket watch. He kept the land clean and the grove of redwoods and fir healthy. He stocked the pond with trout and tended his bee hives. He raised steer (affectionately known as the boys) so he could enjoy prime beef at a low price. He practiced water conservation and composting. He had five or six years worth of dry firewood in large stacks near his house. He fed the ravens and occasionally hunted deer in a deserted apple orchard north of his ranch. He kept extensive financial records of every dollar he had earned or spent. He had kitchen drawers filled with rubber bands and used aluminum foil. He was the first “old” person I knew as a friend and I was fascinated by him.

In the early 1930s Val and his deceased wife Frieda had bought and cleared the 20 acre parcel in east Mendocino bordering on the Jackson State Forest. According to Val, they built the redwood chicken and storage coops to the “UC Berkeley agricultural handbook specifications.” They had run a modestly successful business selling eggs for many years. They never had children. I remember Val adamantly telling me that they had wanted children, especially Frieda, but they could not afford them. So now, here he was, with twenty or so young adult “children” living in his coops and in assorted trailers, vans and buses parked on the land. He was, as he described himself, a humanitarian. He welcomed the hippies and the dropouts, inviting those he liked to make his land their home. He was accepting of lifestyles and work habits that were the opposite of his own. He taught all of us, refugees from cities and suburbs, how to live on the land.

There was a division of labor that Val instituted and strictly enforced. The men were enlisted as a road crew, constantly filling in and tamping down gravel into the holes on the long driveway from Little Lake Road to the ranch. They also split wood for Val and helped him with chores that required muscle. The women cleaned Val’s house and helped him with his laundry and cooking. We all took turns visiting him in the evening. Because of his bad back he was uncomfortable sitting so he would lie on his couch holding court. His favorite drink was beer. He would have a glass almost every evening, two if he was feeling especially festive. His favorite indulgence was chocolate. He kept boxes of it hidden under his bed and would offer the sweets to his guests if he was in a good mood.

Val’s house was fully functional with all the amenities, but the rest of us lived very simply. We had cold water, minimal electricity and outhouses. Eventually a few residents of the land built a shower with a wood burning stove to heat the water. Before that time we showered at friends’ homes or the Recreation Center and did laundry in town. Living at Val’s was like being on an extended camping trip. We were young and spirited and craved experience more than comfort.

When I was about four months pregnant Wayne and I moved into a trailer. It felt like a real house after living in a chicken coop for eight months. I loved being pregnant and felt healthy and robust throughout the entire nine months. I went regularly to the doctor but had planned on having a home birth, although I didn’t mention this plan to Val. He was unfamiliar with pregnancies and births, so he never asked. On October 5th, 1971 I went to sleep around 9:00 pm, woke up at midnight in labor, and by 6:30 in the morning had given birth to a healthy baby girl, with the help of her father and a friend who had helped at other home births. It was truly the most miraculous experience of my life and stays vividly in my memory.

On October 7th we brought our daughter, Cayenne, to meet Val. He weighed her on an egg scale. He was very excited about the baby. He told us that as far as he knew, there had never been a live birth on his land. This was a first. He probably didn’t think about the deer, raccoons, and other critters that lived there, but he shared in the joy of the miracle and that gave us great happiness. We continued living at Val’s until mid 1974. There was a sense of community among the residents, help in time of need, friendships, shared meals, parties, campfires, and the company of Val. It was such a different time than the ensuing decades. We had financial leeway, time to play, time to talk, think, dream, and, eventually, time to grow up.

Val died in 1989 at the age of 88. Cayenne and I went to the memorial service on the land for one last visit. The service was late so we decided to walk to the pond. As we stood looking at the water, talking about Val, a great blue heron swooped low over the water, rose, then circled the pond twice and flew away. We looked at one another and knew we had experienced a moment of magic. Without saying a word we walked hand in hand to the car and drove home. Our visit was complete.