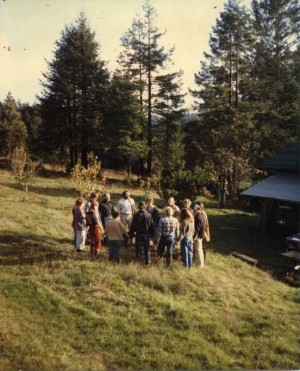 The following article was written by Chuck Bush in 2007. He built a house on Middle Ridge Road in 1990 and lived there, near Salmon Creek Farm, for many years with his wife Marion. We re-publish this article because it is so relevant to our current exhibit, “Mendocino in the Era of Change: Hippies Use the Back Door”. We have added an exciting update on Salmon Creek Farm at the end.

Many of us are old enough to remember the Hippies of the late 60’s and early 70’s – the “flower children,” who represented the counterculture of communal living, the simple life of love, harmony with nature, living off the land and getting back to basics. Many of them found their way up to Albion where communes flourished – and still do.

Leona Walden’s was one of them. In 1971, Robert Greenway, a psychology professor at Sonoma State, was very interested in counterculture phenomenon. He bought some land on Middle Ridge in Albion, designating 30 acres as a commune, and found some young men and women, including Leona, to join him and his partner. It was all hillside property, extending down to Big Salmon Creek and duly named Salmon Creek Farm. They started with 4 adults and 7 kids, and eventually maxed out at 12 adults and the 7 kids.

At first of course there was no running water, no power, no phones and no buildings. Living that first summer out in the open, they built a bunkhouse for all the children, and a next door neighbor let them draw water from her well until they were able to pipe water in from another spring. They assembled a large geodesic dome and covered it with clear plastic for a communal kitchen. The first real windstorm shredded it to bits. Fortunately, Greenway had bought an old garage on abutting property and that became their kitchen.

They found a source of used redwood from some old chicken coops in Petaluma and built rudimentary houses with a communal sauna. They were, of course, non-code, and so they were red-flagged by the county. But because so many other people were doing the same thing all over the county, there was no way the county could make them all stop or take action against so many people. This caused the county to come up with “Class K” whereby, if they were owner-built and okay for health and safety (septic, foundation, electric, etc.), the structure itself was up to them.

The group developed their own bylaws. Each adult and child had one vote and nothing was approved unless everyone agreed (which led to some very long meetings). They all shared in the land ownership – for adults $2000 and $1000 for each child (with the other $1000 due at age 25). They paid that money to a 15 year mortgage (which they retired in only 8 years), with each adult contributing $30/month plus $15 per child. An identical monthly payment was contributed towards food and necessities. They all had dinner together and shared the workload (Leona would do all the cooking and clean up for one week and then not again until everyone else had a turn – the kids did the dishes).

Together with the members of other communes, such as Table Mountain at the end of Albion Ridge Road and many others, they became known as the “Albion Nation.” They had country fairs together to raise money, and shared ritual ceremonies for every solstice and equinox. Altogether there was a lot of intellect, loads of artists and many musicians – frequent entertainment was the rule. Their relationship with the community was very positive with community cookouts and ballgames. The Hamm brothers, who lived close by, would have all the commune kids in for Saturday breakfast and cartoons on the tube.

Leona moved in 1976, selling her rustic abode, but not her share of the property. The bylaws said you could sell your house at whatever price you wished, but you could only sell your property for what you paid for it, as a deterrent to keep the “family” together – and it seems to have worked. She and most of the original group are still owners and good friends. She feels Salmon Creek Farm was, and still is, a wonderful part of her life. Of course by now there are some newer members and creature comforts have slowly crept in – all of the cabins have electricity and running water and seven have kitchens.

A two part film has recently been made by London based Freize magazine. In part one of the film, three of Salmon Creek Farm’s original communards tell the fascinating story of this rural colony, and their experiences as pioneers of alternative living in 1970s California. In part two, online several weeks from now, Haeg talks about his current work restoring the cabins, woods and orchard at Salmon Creek Farm, the legacy of its past and his plans for its future.