Staff Note: The 2015 Kelley House Annual Historical Review, a benefit of membership in the museum, will be mailed soon. The title of the Review this year is Thomas Petersen: Master Shipbuilder and Louis Hough is the author. Some time ago, he wrote this article as he began his research. The Review will be for sale to non-members at the museum. Formerly of Mendocino, Mr. Hough now resides in Walnut Creek. He wrote one previous Review in 2000, Sotoyome. 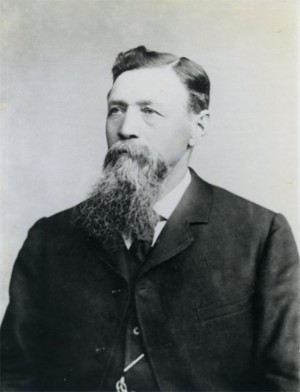 Just inside the Noyo harbor, a curve of the river creates a basin of calm water and broad tidal flats. There, within sight of the Pacific Ocean, Thomas Petersen built his second, three-masted schooner on slipways adjacent to the Noyo Lumber Company. The sawmill was owned by Henry Wetherbee and Alexander McPherson who teamed up in September 1864 to operate the mill on the flats, cutting timber harvested in forests nearby.

Three years after their union, Wetherbee and McPherson chose Petersen to furnish them with a schooner. Named James Townsend, she was said to have cost Noyo Lumber about $30,000. Constructed of Douglas fir James Townsend was launched in 1868. She was 107.8 feet long, 29 feet wide, with a depth of 9.1 feet. She measured 168.10 feet gross tons and a net tonnage of 159.72. In maritime parlance a “ton” is a measure of space not weight and equal to 100 cubic feet. Thus, 159.72 tons equals 1,597.2 cubic feet. Imagine a room in your house, which measures 10 feet wide by 20 feet deep and 8 feet high. That equals 1,600 cubic feet. The Townsend had 1,597 cubic feet in her holds to stow cargo.

Townsend was hailed as the first three-masted schooner built on the Redwood Coast, and for twenty-two years ranged from Point Arena, Fort Bragg, Noyo Harbor to Humboldt Bay securing lumber cargoes and delivering them to San Francisco.  Her long career ended when a violent storm tore her to pieces on August 8, 1895, off Point Arena. The Mendocino Beacon said that she was being towed to sea from Point Arena by the steamer Noyo:

In the pitch black hours in “a sea that was raging furiously” the towing hawser snapped. Within fifteen minutes Townsend was blown ashore at Little Wash Rock just north of Point Arena Light Station. She struck the rock once, was swept back out a short distance, then battered against the rock again…the two aft masts fell and from then until daylight she foundered in the terrible waves which were seemingly not satisfied until they had scattered all 210,000 feet of redwood lumber and the entire schooner save a portion of the fore deck and [fore] mast…
Captain Ole Jensen and his crew of five huddled on the fo’c’sle until pulled to safety about 8:00 that morning when the sea abated…It is an awe inspiring sight that reaches one’s eye on approaching the scene of the wreck as the beach for one mile is covered with shattered remains of a cargo and schooner.

While at his Noyo shipyard, Petersen won a contract to build a small wooden steam tug. Named C.J. Brenham, when launched in 1868, she was 133.3 gross tons and her screw propeller driven by a coal fired 200 horsepower engine. She was named for the mayor of San Francisco, Charles James Brenham, who also was a master mariner. Brenham had two masts and was measured 102 feet in length, with a beam of 23.4, and a depth of 11 feet. Her homeport was Astoria, Oregon. Signatory to her registration papers was Brenham’s owner Alexander McPherson.

Like all tugs, this hard working little ship did what tugs did, pull sailing vessels out to sea and guide them into port. Brenham was also busy towing vessels along the northern coast and she was reported being as far north as Astoria, Oregon.