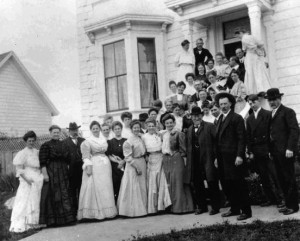 Demonstrating, once again, that there are few things new under the sun, the Kelley House Museum invites Mendocino and its neighbors to celebrate the season with an opportunity to partake of some ‘liquid cheer!’ We draw your attention to the Perley Maxwell photograph of the guests at the home of Mr. Henry H. Jarvis, Mendocino merchant. The occasion was Christmas Day, 1906. Mr. Jarvis, born in Surrey, Maine in 1849, came to the California coast as a youth, and began his career as a ‘riverman for Joshua Grindle and John Clark, early day lumbermen’ (Mendocino Coast Genealogical Society, Births, Deaths and Marriages on California’s Mendocino Coast, vol. 4, p. 129). He later opened a mercantile in partnership with Thomas Dollard, and married Ardell Maxwell in 1878. Perley Maxwell, twenty years his junior, was his brother-in-law.
The identities of only a handful of the guests that day are known. C.O. Packard, far right corner, stands with his son, Harold, on his left. Standing in the foreground is Henry Jarvis, and on his left is Albert Brown, who sports a beard and bowler hat. Willard Packard, son of C. O., stands between and slightly behind Mr. Jarvis and Mr. Brown. Directly above Mr. Jarvis, there is a woman believed to be Nannie Escola.
Note how many women attended; and the young ones who stood in front, obviously enjoying themselves! This appears to have been a party held in the light of day, so perhaps no alcohol was served, in contrast to the party planned by the Kelley House this year for Friday, December 4.
The Kelley House will offer Scotch tastings, beginning at 4:00 in the afternoon and ending at 7:00 that evening. How Eliza Owen Kelley, wife of the home’s original owner, would have objected to such proceedings, strict Baptist that she was! Refreshments of other kinds will also be provided, as well as seasonal entertainments.
The Kelley House may be accessed from either Main Street or via our 45007 Albion Street address. This event is free to members; non-members may either join as members at the door (thank you!) or pay $10 per person to sample the varieties of Scotch. Bring a friend, and always drink responsibly.