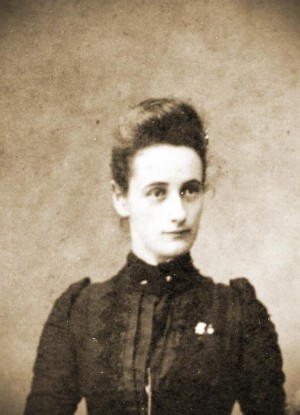 Charlotte Hoak grew up in the wilds of Comptche, a local girl, born in 1874 on ranch land that had formerly been under the jurisdiction of the local Pomo chief, Comptche—hence the name the region became known by. Comptche is, in fact, a Pomo word that means “the valley among the hills.” It’s land the Pomo traveled through each summer on their way to the coast and the Comptche-Ukiah Road is an old stagecoach route. Look closely and you might still find evidence of the Chief Comptche’s world.

Certainly Charlotte must have seen it in her childhood and may have been part of why she loved the natural world. She liked to say she was born with two green thumbs. Both of her parents loved growing plants and on the day of her birth, her father planted seven redwood trees. Charlotte referred to them as her Birthday Grove, and her trees still stand today. Her passion for cultivation had spouted by the time she was five years old. She was fascinated by the plant life of California and spent a lifetime lecturing and writing articles on California’s native flora. In 1896, at the age of 22, Charlotte enrolled at the University of California at Berkeley. She majored in English; botany was her minor. She received her degree in 1900 and after two years of teaching returned to Berkeley for a Masters degree, studying under the head of the botany department. Her research looked at Mendocino County’s Pygmy Forest, which ultimately she helped save.

Located just a few miles inland, the Pygmy Forest extends south from Ft. Bragg for about 30 miles. Once known as the Mendocino Barrens, the land produces dwarf evergreen—some as small as nine or ten inches high. Cypress, Bishop Pine, Beach Pine. Tucked into this miniature world are huckleberry, ferns, rhododendrons, lilies and a range of evergreen shrubs.

It was in her capacity as the horticulture chairman of the California Garden Club that Charlotte put her fascination with the Pygmy Forest to work. In 1950, she began encouraging the club to purchase some of the curious forestland and donate it to California’s state park system. Charlotte wrote extensively about the pygmy and the club mounted a drive to raise the money. It took almost 18 years, but in September 1969, acreage adjacent to Van Damme State Park was dedicated as the Charlotte M. Hoak Memorial Pygmy Forest.

Charlotte moved to Southern California in 1906, purchasing a home in South Pasadena. She spent 25 years teaching agriculture and horticulture in the elementary schools of Los Angeles. She was a columnist for the Pasadena Star-News and her writings became known internationally. Her many accomplishments include the discovery of a new lily in the mountains of Southern California, which was named for her, and her undying love of begonias, for which she received numerous awards, including the Kenworthy Gray Plaque in recognition of her outstanding contribution. Her friends included John Muir.

Charlotte Hoak is one of Mendocino’s heroines. This remarkable woman lived to be 93 and at the age of 84, was named “Miss Horticulture 1958.” She was a runner-up for “Woman Gardener of the United States.” To learn more about Charlotte or other noteworthy pioneers, visit the Kelley House Museum, discover the rich roots that have given birth to this unique town that is our home.