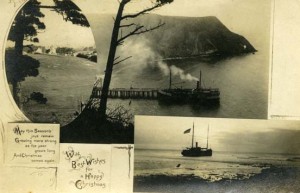 A postcard in the archival collection at the Kelley House Museum brought to mind the fact that not all of us are always able to spend the holidays in our homes. The postcard includes the sentiment, “May this Season’s joys remain/Growing more strong as the year grows long/And Christmas comes again.” Photographs of the steam schooner, Pomo, while anchored off shore and at the wharf, in addition to an oval photo insert, depict Point Arena, ca. 1905.

Built in 1903 in Fairhaven, California by the H. D. Bendixen Shipbuilding Company for the Albion River Steamship Company of San Francisco, the steam schooner measured 131 feet by 33 feet by 11 feet, and had a single deck. The Pomo was capable of carrying 300,000 board feet of lumber, and several passengers. Although the ship was registered with San Francisco as her home port, the principle port of call was Albion. The Pomo operated under the management of Swayne and Hoyt. During her years of service, she was kept on the run between San Francisco, Point Arena and Albion.

The post card was created by Nannie Flood Escola, member of a pioneer Mendocino family, wife, mother, grandmother, teacher and historian. Nannie’s interest in maritime history meant that she corresponded for years with the Maritime Museum in San Francisco, and with other maritime history enthusiasts throughout the world. Her work and collections are now an integral part of the Kelley House Museum.

So what would it be like to be at sea over Christmas? Undoubtedly, some of our readers have experienced this for themselves. One would miss being with family; but with luck, crew members become one’s family while serving aboard ship. If off the shore of our North Coast, it would undoubtedly be cold; but sailors are typically well-prepared for the elements, if they are at all experienced. Cookies? Egg nog? A turkey on a platter? Perhaps. These questions bring to mind that section of Charles Dickens’ A Christmas Carol, addressing the fact that Christmas may be celebrated under any circumstances.

Again the Ghost sped on, above the black and heaving sea — on, on — until, being far away, as he told Scrooge, from any shore, they lighted on a ship. They stood beside the helmsman at the wheel, the look-out in the bow, the officers who had the watch; dark, ghostly figures in their several stations; but every man among them hummed a Christmas tune, or had a Christmas thought, or spoke below his breath to his companion of some bygone Christmas Day, with homeward hopes belonging to it. And every man on board, waking or sleeping, good or bad, had had a kinder word for another on that day than on any day in the year; and had shared to some extent in its festivities; and had remembered those he cared for at a distance, and had known that they delighted to remember him (http://literature.org/authors/dickens-charles/christmas-carol/chapter-03.html).

Oddly enough, the fate of the steam schooner Pomo, was to be wrecked off Point Reyes on New Year’s Eve, 1913.