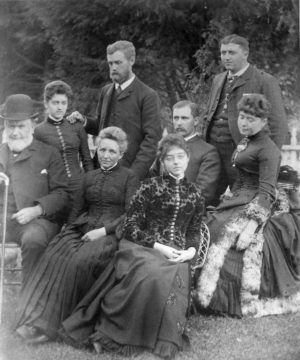 It is going to be a difficult Thanksgiving for many residents of Mendocino County and those neighboring areas hit hardest by the recent fires. As an organization dealing in history, it might be instructive to look at one aspect of why the Kelley House Museum is here: keeping Mendocino’s past alive for today and its present alive for the future.

This photograph of the Ford family, who originally lived on Mendocino’s Main Street in what is now the office of the Mendocino Area Parks Association, and a State Parks visitor center and museum, was donated to the Kelley House by a Ford family descendant, Alice Earl Wilder. Jerome B. and Martha Hayes Ford decided to leave Mendocino in 1872, but they kept up with their friends on the North Coast; their descendants continue to hold family reunions at the Ford House in Mendocino. The Fords posed for the photograph on Thanksgiving Day, c. 1886. They had gathered with a friend, the Reverend John Rea, at their home in Oakland. At that time, Thanksgiving as a national holiday was about twenty years old. It was created by a proclamation issued by President Abraham Lincoln during the Civil War, in thanksgiving for the extension of “our national life for another year.”

In October 1991, a fire raged through the Oakland Hills, and up to the fires of 2017, had been deemed the worst fire disaster in the history of California. According to a “Kelley House Calendar” written by Wally Smith for the Beacon in December of 1992, the home of Ford family descendants, George and Mary Skopecek, was lost in the Oakland Hills fire. Kelley House volunteers asked them about whether family heirlooms had been saved, with the idea that the archives could replace some of the family photographs if they had been lost. Mr. Skopecek’s reply was, “At a time like this, you don’t think very clearly. We might have rescued from the flames our family photo albums and [the] genealogy library, but we didn’t.”

The Beacon article stated that two dozen family photographs recording the Ford family history were replaced for the Skopeceks by the Kelley House. Back in 1992, Bill Wagner was still volunteering at the Kelley House, taking photographs of historic images, and utilizing a system which he modeled after that designed by Peter Palmquist, historian of West Coast photography and photographers, from Arcata. When Mr. Smith’s article came out, he opened with the statement that the Kelley House then had “more than 4,500 historical photographs in its files.” Today, we have nearly ten thousand items cataloged, with more to be done. In 1992, the Kelley House had already begun to build a vault to store the archival items, in a temperature and humidity controlled space. The vault was dedicated to Dorothy Bear and Beth Stebbins in 1993; and by 1994 the interior walls were finished and ready for the collections.

This Thanksgiving, we at the Kelley House Museum want to express our gratitude to the members of our community for their help in preserving our shared history, a history being made every day.