All Headdress and No Ponies

Home » Making History Blog » All Headdress and No Ponies
Previous Next

All Headdress and No Ponies 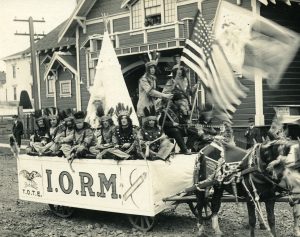 While visions of Pilgrims and Wampanoags, and turkeys, danced in my head last week, my thoughts just naturally turned to the Improved Order of Red Men, a fraternal organization very big in these parts in the late 19th and early 20th centuries. Photographs in the Kelley House archives show groups of Red Men, tricked out in what can best be described as Indian drag, posing at their initiation ceremonies or riding on floats in local parades (see the photo).

The IORM is a patriotic, beneficial, and social organization that traces its origin back to secret anti-English societies founded before the American Revolution — the Sons of Liberty being the most well-known. When, in December of 1773, Sons of Liberty members dressed up as Mohawks to dump tea into Boston Harbor, they set the fashion standard for the elaborate couture and ceremonies central to Red Men organizations. At the height of its popularity in the 1920s, the IORM had upwards of 500,000 members in 46 states. Today, it has 15,000 members in 15 states.

Here on the coast, the IORM counted over 100 members from towns up and down the coast. In 1888, the Santana Tribe (#60) was chartered in Fort Bragg, and built its wigwam on the southwest corner of Main Street and Redwood; an impressive three-story building, it stood where the Outdoor Store is now. The Waw Beek Tribe (#164) formed in 1905 on “the hunting grounds of Mendocino” and met in the leased wigwam of the Odd Fellows Hall.

The IORM has always had a “special love of and respect for the American flag.” Originally, only “free white males of good moral character, of the full age of twenty-one great suns” were eligible for membership. However, in 1887, the Degree of Pocahontas was created as the women’s auxiliary, the name “taken from the character . . . whose brief life presents a touching picture of grace, beauty, and virtue as well as constant friendship to the palefaces” (http://www.redmen.org/pocahontas/info).

An accounting ledger of the Mendocino Tribe (another treasure of the Kelley House archives) has an “Inventory of Paraphernalia” taken in March, 1919: 1 Chiefs regalia, 4 Past Sachem regalia, 4 Warrior regalia, 2 Prophet regalia, 16 pairs moccasins, 1 tom tom, 1 red-stained club, 4 Warriors clubs, 4 hunting knives, 4 bows (large), 3 bows (small), 4 arrows, 2 Scouts torches, 1 candlestick, 2 red tomahawks, 4 tepees, 1 totem eagle, 1 calumet, and 1 wampum belt. Also counted were 4 packs of playing cards and 1 wooden cribbage board, but it’s a wonder there was time for cards what with all the bows and arrows.

Besides the costumes and red-stained clubs, the IORM also provided a kind of social security: it reimbursed dues-paying members for medical costs, paid them disability compensation, and covered their funeral expenses. These were no small considerations back then, but numerous other fraternal organizations provided similar benefits. What was so attractive about the opportunity to express one’s inner Hiawatha while sporting an outfit that would have made him cringe? Tune in next week for one answer. Meanwhile, stop into the Kelley House Museum to see more photos of Red Men on parade.