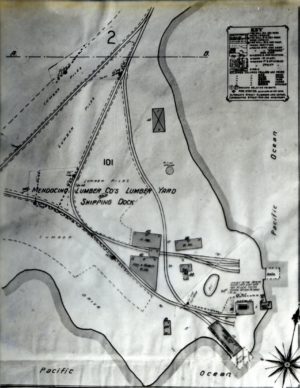 The scene is Mendocino’s Shipping Point. The characters are unnamed crew members of the steamer Noyo, longshoremen and a railroad crew of three. The time is 90 years ago this week, April 11, 1928 to be exact. According to the Mendocino Beacon, at approximately 7:30 in the morning of that day, an accident occurred involving eight railcars and 33,000 board feet of lumber. Oh, yes, there was also gravity, and the physics involved in wet rail lines. It must have been quite dramatic and if one was not yet awake that morning, the awakening might have been rather sudden.

The April 14, 1928, edition of the Beacon reported rather casually (as none of the workingmen involved were named) that a “train of eight cars coupled together and manned by a crew of three men, started down from the yard with a heavy load toward the landing.” The article further explained that the rails were wet and slippery. The track in question led from the lumber yard to the loading chutes. There was apparently no need for an engine, as one is not mentioned. The train gained momentum, as there was a slight incline involved, heading down toward the edge of the headland and the mill’s yards and shipping operation:

The crew bent all their strength on the brakes, which failed to hold and they saw that a crash was inevitable, but they stuck to the brakes until the train reached the shed over the chutes, when thinking discretion the better part of valor, they jumped together as one man.

What was that like? Did one of the crew say to the other two, “Okay, boys, we jump on three?”  Sounds like a scary game of “Chicken!” The article reported that no one was hurt. The same could not be said for the shed over the chutes. How about the longshoremen loading the steamer Noyo and its crew down below? It must have been quite a sight and surprise to see eight loaded railcars come over the cliff and hit the rocks.

This is where there seems to be a discrepancy between the writer of that 1928 Beacon article and historian W. Francis Jackson. In Jackson’s compilation of events titled Mendocino City: A Daily Journal – 1852-1938, he wrote on April 11, 1928, “Tremendous crash heard through town as eight cars loaded with lumber ran through the Point loading shed and on to the rocks below.” The original article mentions a wharf at the location of the accident. Did Mendocino’s Shipping Point have a wharf? Perhaps this is just a matter of semantics, but a visual check of the Sanborn Fire Insurance maps for this vital part of the mill’s operation didn’t yield a historic wharf. There were “platforms” extending beyond the edge of the cliffs, in two locations. Perhaps they were deemed equivalent to a “wharf.”

With a roar the cars shot through the shed, crashed through the bumper at the end and plunged over the end of the wharf and onto the rocks 30 feet below.

The crash resulted in a tangle of lumber and railcars on the rocks, some of which was salvaged. One has to wonder who got that assignment! To our knowledge, no photograph was taken. We submit as evidence, however, the change in the Sanborn maps. In 1903, there are three rail lines visibly connected to a “chute” which would have accessed loading ships, and a structure labeled “Freight Shed.” By 1929, those rail lines come to a dead end before reaching the edge of the cliff, and the freight shed is gone. Perhaps the event of April 1928 was responsible for the change.