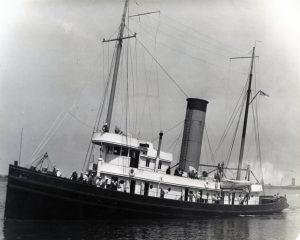 A drifting skiff and an attentive night watchman kicked off one of Mendocino County’s strangest maritime mysteries one quiet afternoon in 1921.

Around 3:30 p.m. on Sunday, November 13th, had you been looking out to sea, you might have noticed a boat racing towards Mendocino Bay from a distance due west. She pulled into harbor and drew close to the blowhole, where her crew secured her near the southeast buoy.

As dusk fell, four men loaded into a skiff and headed for shore, but instead of using the landing steps at the former slide chute, they beached their skiff on the sand and scrambled up the embankment. Each carried a large suitcase.

They went first to Granskog’s to hire a car, but none was available. At Ellison’s Garage, they found what they needed and pressed on to the north.

By evening, a rising tide set their dinghy adrift and a watchman secured it, but it wasn’t until Wednesday that anyone made an attempt to board the vessel and only then because the moorings had come loose such that the boat would be sucked into the blowhole and destroyed.

On boarding the boat, it was clear that she had been abandoned. A Beacon reporter of the time noted that nothing was left but a half case of eggs, some bacon, and “a portion of meat that was getting decidedly strong.” A map of the California coast was spread out on the table and nearby lay a rifle and a revolver.

The case was reported immediately to Sheriff Ralph Byrnes, a lawman renowned throughout Northern California. He ordered an investigation into the vessel, known as The Petrel, whose homeport indicated she hailed from the greater Seattle area.

At the time of events in question, Prohibition was in force, though Mendocino City had been dry from 1909. Speculation ensued as people tried to determine was the boat a mere rum runner or a drug smuggler, as both operated along the coast with enough frequency to require the surveillance of two Coast Guard vessels.

“It seems probable the little boat in the harbor might have engaged in some venture for apparently she bears no maritime registry number, and her papers are rather cooked up affairs and not the kind that could pass muster with port authorities,” said the same Beacon reporter.

The boat was towed into Russian Gulch and moored until further details unfolded. Valued at $15,000 to $25,000, the Mendocino Lumber Company—whose representative had providing the new mooring ropes for The Petrel—made a claim to salvage the boat, pointing out that it otherwise would have broken loose entirely and been destroyed.

Built to stand all types of weather, The Petrel did indeed successfully ply the coast with drugs and alcohol for the eight months she was in service.  Her crew reportedly disappeared from Willits on a train bound for San Francisco. Inquiries into their whereabouts yielded a series of dead ends and The Petrel was sold at auction.

Photograph: The Cahokia, a Coast Guard tug , used to patrol the waters for bootleggers during Prohibition.