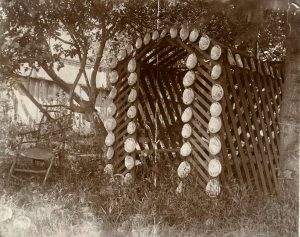 If you visit the Kelley House Museum Archives and go down the short flight of stairs into the chilly vault, it’s not hard to imagine you are diving for knowledge—especially where abalone are concerned. Should you chance to don a pair of white gloves and take a look through the old, bound copies of The Beacon, the public’s concerns over the misuse of local natural resources quickly become evident. By 1913, despite prior actions by the Mendocino County Board of Supervisors and the Department of Fish and Game, strict guidelines were laid out which covered how and when people could hunt and fish in the county.

Up until this time, abalone was still little known and hardly appreciated by most people. Though writers, such as Jack London, frequented the Carmel and Monterey area and collected abalone for use in chowder, the shellfish might have slipped back into a watery oblivion but for the efforts of a man popularly known as Chef Ernst (Pop) Doetler, the Abalone King.

Around 1908, Pop moved to Monterey and set up a restaurant offering fresh, Toke Point Oysters harvested from San Francisco Bay. Over time, quality concerns drove him to abandon the oyster and search for something unique and local which could be had fresh. He found what he was looking for just blocks away on Cannery Row in the form of the abalone.

Though abalone was starting to appear on local menus, it was generally boiled in vinegar, steam-canned, or treated with lye to break down the connective tissue. Pop determined that the abalone could be cut into a “steak,” dredged in flour, dipped in an egg wash, rolled in bread crumbs, and fried in oil. The result was a tender and flavorful dish which quickly became a sensation through Pop’s showmanship. With the advent of the Panama Pacific International Exposition of 1915, where Monterey County displayed canned abalone as one of its county’s primary products, the shellfish reached a still wider audience.

Most of the local abalone used by Pop Ernst was supplied from Japanese divers working nearby who were happy to find a new customer within state lines. Always in search of the best and freshest product, Pop became a broker for local Japanese abalone fishermen and restaurants across the state.

Sadly, the rise in abalone’s popularity contributed to the eventual destruction of the fishery. By the late 1950s, the California abalone fishery landed 5.4 million pounds of abalone, of which only 10,000 pounds came from Monterey. Once the epicenter of the fishery, Monterey County was no longer a factor in the abalone market by 1959 and has never fully recovered. The abalone currently available in that area is farm grown.

What was gleaned from Monterey’s experience has led to still greater conservation north of the Golden Gate and strict regulations around every aspect of the recreational and commercial fishery. Had Pop wandered north to Mendocino County instead of south, would we have shared the same fate? You be the judge.