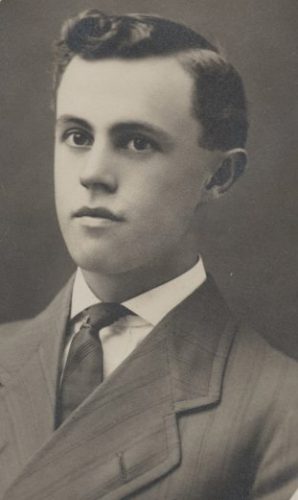 “Only four things are necessary in the treatment of this disease: sunlight, fresh air, good food, and rest,” according to Dr. Thomas Darlington, Commissioner of Health, speaking at a conference on Consumption in New York in 1904.

In reality, consumption—better known as tuberculosis—remained incurable until the mid 1940s. Before then, 50% of people who contracted the disease eventually would die of it. Tuberculosis spread quickly among the poor and in crowded, urban conditions. It would be tempting to think that in the good living of Mendocino County the population would remain unaffected, but the record shows otherwise. Since the time of the town’s founding, tuberculosis was a steady companion to rich and poor alike.

Russell Kelley, eldest son of William and Eliza Kelley, ultimately may have died of it. Samuel Jessie Chalfant, who had worked at Big River, succumbed to it at the age of 46, leaving behind a wife and children.

In the family of Charles O. Packard, at the time a druggist in Mendocino, two of the eight children contracted tuberculosis. Packard’s son Charles Wilfred, who lived a hale and happy life on the Coast, fell ill while in Oregon. He died in 1911 at the age of 21. According to his obituary in the Beacon, “Ambitious and virile, with the abandon of youth, he threw himself into his work thoughtless of health.” In 1915, Hannah May, the fourth child in the family, became ill. The Beacon noted that she fell to “the arch enemy of human life, the Great White Plague” at the age of 26. “She was a brave and submissive sufferer and bore her enforced incarceration with little complaint,” as was expected of victims at that time.

Once contagion became better understood, families at all levels were encouraged to send their loved ones to sanatoriums. The well-to-do could treat the problem in their homes, increasing the risk to the family and caregivers. Armed with patent medicines, like those seen at the Kelley House Museum, they attempted to mitigate symptoms. The Packard family was able to keep their son Wilfred nearby. “Every aid and comfort were provided by indulgent parents, and a lodge established near Comptche, where, nourished by wholesome and abundant food and warmed and bathed by the summer sun his strength began to return, and hope sprang into life.” But, as death drew near, he returned to his family in Mendocino to die in the company of his loved ones.

Throughout the county, from Gualala to Westport, from Covelo to Hopland, tuberculosis took its steady toll. In places such as Fort Bragg, with its higher population, the tuberculosis rate was twenty times that of the rest of the county as late as 1956.

A Russian immigrant named Selman Waksman, an East Coast soils scientist and eventual Nobel Prize winner, had a hunch. He theorized the cure lay in the teeming microbial world beneath our feet and, in 1943, he isolated Streptomycin, the first antibiotic effective in controlling the disease.

Writing recently in the Ukiah Daily Journal, Jody Martinez chronicles the county’s public health policy and notes an example from the 1950s of the impact of untreated disease, where a couple spread tuberculosis to others, ultimately causing the deaths of eight people and the ongoing treatment of 27 others at a cost of $139,000 to the county.