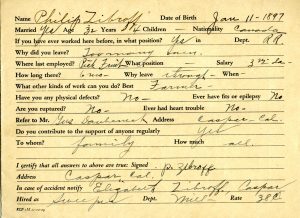 On the surface of it, there may not seem to be a lot of interaction between the topic of the Kelley House Museum’s new exhibit, immigration, and the lumber industry here on the North coast, however, without an influx of immigrant labor, there may not have been an industry.

From the very beginning of the operations of the Mendocino Lumber Company’s mill, immigrant workers were hired, and while not all of them remained, many did.  There is a wealth of archival information at the Kelley House, waiting to be mined for the untold stories of these men, and the women who took on the responsibilities of raising their families, and of providing a social life for the town.

Our exhibit has one feature which focuses on the records of the Caspar Lumber Company’s employees.  These records are from the period between the two world wars of the last century.  They are printed envelopes, providing employee information; answers to questions such as “Are you ruptured?”

The envelopes and their contents are part of the Harry J. Wakerley Collection, a donation made to the Kelley House Museum in 1989.  Harry Jackson Wakerley was the great-grandson of Jacob Green Jackson, and began working in the company store in 1929; he later worked as manager of the main store (as opposed to Camp stores) until the mill closed.

.  The Caspar Lumber Company was incorporated as such on November 1, 1880; although its roots go back to William H. Kelly’s partnership with Rundle in 1860.  The mill closed in 1955.  Caspar was typical of company towns, and not so different in that respect from Mendocino, when the mill was running.  Employees would have known each other, and each other’s children, who attended school together, and perhaps grew up to take a place in the mill.  These records are a rare view into their lives from the period between the First World War into the years of the Great Depression.

The exhibit, “Mendocino’s Mirror: Reflections on Immigration” opened on May 6th, and continues through the summer, closing on August 8th, open Fridays, Saturdays, Sundays and Mondays.  Spend some time with us, and see whether we have a piece of your story!