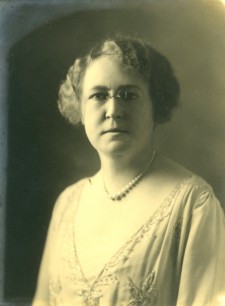 This portrait of a woman in her late 20’s or early 30’s portrays her as a serious person, with a sensible haircut, glasses and an understated pearl necklace. The name on the photograph says “Hazel Pruett.”

We are wondering why Hazel’s photograph is in the collection of the Kelley House Museum. Ancestry.com lists a Hazel Pruett born October 8, 1890 in Ukiah to Robert and Cangrada Pruett. If this is the same woman, it doesn’t appear that she or her parents ever lived on the Mendocino coast.  Hazel went off to become a teacher. She married Howard Ellsworth Grimes and moved to Alameda County to live. From the style of the haircut and the dress, this photograph was probably taken around the time of their marriage in 1927.  It doesn’t appear that Mr. Grimes ever lived in Mendocino either.  Is this truly Hazel and what is the connection to our coast?