Who Doesn’t Love a Picnic?

Who Doesn’t Love a Picnic? 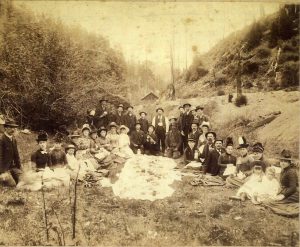 If you went down in the woods some days starting in the 1880s, you would not find teddy bears having a picnic.  The picnickers were much more likely to be members of the well-off families from the communities along the coast.  People who didn’t actually have to work in the woods thought it was great fun to go out and eat in them.

Although the French are credited with inventing the picnic (le piquenique was added to the French dictionary in 1740), blue-blooded English Victorians embraced the concept of outdoor dining and established the formalities for the rather splendid events they became.  These customs for the pic-nic—“an elegant meal eaten out of doors”–were adopted in the eastern United States as early as the 1840s and made their way west with some of the immigrants who came to Mendocino County.

As part of the current Kelley House exhibit, “When Farm to Table Was Every Day,” we have been looking at the eating habits of the early Mendonesians, and have noticed how popular picnics were.  Among the nearly 40 archival picnic photos in the Kelley House collection, there are shots of Van Damme, Dennen and Coombs family members on an 1898 Little River picnic; the MacCallums on an 1890 Ten Mile River outing; the Perkins, Stickney and Ledford clans at a camp on Big River in 1897; the Kennys, Conways, Gormans and Doughertys dining al fresco at Cuffy’s Cove around 1894; and Henry Jarvis and the McCornacks seated around a long table (with a white tablecloth) in a redwood grove in 1900.

About the 1889 photo shown here of a Stevens, Pullen, Gray family picnic in Albion, Etta Stevens Pullen wrote in her diary, “We had a grand excursion up Albion River in boats, then on railroad cars to the end of the line, had a fine lunch spread, our pictures taken, and everything lovely.”

Close scrutiny of the ensemble reveals that nearly everyone was dressed in their finery, sporting stylish hats and high-button shoes.  Not what we moderns would deem outdoor wear, but in keeping with the prescriptions of the day.  Writing in Queen of the Household—“a repository of useful information for every housekeeper”—in 1896, Mrs. M.W. Ellsworth laid out the ideal picnic outfit for women: “A woolen dress that is not too heavy nor yet too new, or a cotton one that is not too thick, with short, trim skirts; solid, easy shoes; pretty but not too fine or thin stockings; a hat that has a broad brim; a sun-shade or parasol; at least two fresh handkerchiefs; some rings; easy gloves, with ample wrists; and a jacket to wear when returning home.”

It isn’t possible to discern what the picnickers are eating, but a poem published in the Beacon in the 1890s gives us an idea.  The anonymous bard had attended a big picnic on Little River, and shared the menu:

Our chef blew a blast that cracked the old cow horn.

When all were seated, sixty-four were in the throng.

The sandwiches were mountain high,

The salad passed in quarts,

The apple pies were very good

And cakes all sizes and sorts.

Sponge cakes, with berry and apple sauce did vie,

Next came an Angel cake, so white it nearly made us cry.

But when they passed me devil cake, I up and said “Good-Bye.”

To get some of those cake recipes, drop by the Kelley House Fridays through Mondays from 11-3.  “When Farm to Table Was Every Day” runs through November 21st.