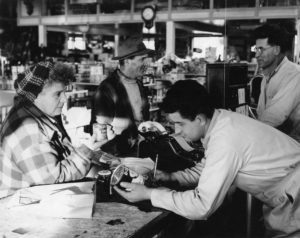 Both Aileen Gomes and her husband, Joseph, came from Portuguese families. Joseph Antone Gomes was born on the island of Flores on April 19, 1893. He left the Azores and immigrated to the United States in 1911. When the First World War came along, he registered for the draft and by 1920 his papers for naturalization had been submitted. Aileen Victoria Francis was born in California January 7, 1897, but both her parents were from the Azores. Joseph and Aileen were married in 1915. The Gomes family had a home on Little Lake Road, where they raised their family: Herbert, Geraldine, Eugene and Maria. A fifth child, another girl named Joyce, came along between 1930 and 1940. Joseph began his working life in Mendocino in the lumberyard. His son, Eugene acquired the nickname “Foggy” by the time he was in high school. Foggy Gomes later became chief of the Mendocino Volunteer Fire Department, where he served for five decades.

This photo of the Gomes shopping at Mendosa’s Market is undated, but there are clues that help determine when it was taken. Some of the items being purchased include Swift’s Allsweet Oleo Margarine, a can of Blue Shrimp, a can of Bartlett pears, and what appears to be some jam or jelly and a loaf of bread. The margarine label helps date the photograph, as does the clothing worn by the Gomes.

Margarine carrying this label was available in 1948, but likely predates that year. Margarine was actually invented by a French chemist in 1869, as a less expensive alternative to butter. Most relevant to this story, during the years of the Second World War, butter was rationed. A substitute came in the form of vegetable-based “oleo.” It was sold with a packet of yellow coloring, meant to approximate the appearance of butter. An advertisement from this product read:

“Easy to color! Smooth-spreading Allsweet comes to you white. To tint it yellow for table use, an exclusive easier-opening packet of pure coloring is provided with each pound.”  (from a 1948 advertisement found on periodpaper.com)

The Allsweet brand was also fortified with Vitamin A: “15,000 USP Units Vitamin A per pound added.”

The photograph appears to have captured an afternoon when both Gus Mendosa and one of his nephews, Morris Mendosa, were working in the store which still bears their family name (now Harvest at Mendosa’s). Gus was well-known and the husband of Alma Jacobs Mendosa. They were married in 1927. Along with his four brothers, he had been in the service during WWI. Morris Joseph Mendosa was born in 1924 and worked as a clerk and meat cutter at the family store. He later served during World War II.

Light enters the windows toward the back of the store. The clock up on the wall reads about 5:35 p.m. Gus, born the same year as Aileen Gomes, stands in front of a device, which appears to hold paper behind some spring clips, and has a key on top of it. Might these be ration cards? The device doesn’t appear to be a cash register. Morris was engaged in writing down the items bought by Aileen Gomes on the page of a receipt book. No barcodes in those days! There is an adding machine on his right, and Aileen is helping Morris by holding up the can of shrimp. It’s a shame she hadn’t turned it just a bit more to one side so that we could read more of the label. We never know which moments of our lives will become historic!

If you’d like to share some of your family’s historic moments with the Kelley House Museum, visit us at 45007 Albion Street during Research Office hours, Monday through Friday, 1- 4 p.m.. Or, come by the museum Fridays through Mondays between 11 a.m. and 3 p.m.to speak with one of our volunteer docents.