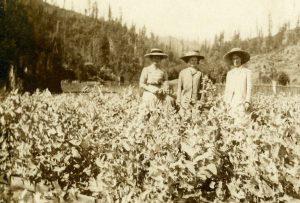 About eleven miles from Mendocino, along the Comptche-Ukiah Road, you can spot the remains of what was once Albion Lumber Company’s Camp 10. How would you know you were in the right place? By the presence of the non-native eucalyptus trees.

Eucalyptus was not the only distant transplant to arrive here in those years. In the late 19th century, at a time when Eastern philosophy, spirituality, music and literature were popular and the University of California, Berkeley, welcomed Indian students, the first Indian labor gangs arrived in California.

These colorful newcomers wore turbans and full beards and held close to Hindu traditions. Known as the third wave of Asian immigrants, they were called “Hindus” as opposed to Indians to avoid confusion with Native American peoples.

Dressed in native clothing, Indian men had a hard time assimilating. Unlike the students, poets, and swamis who preceded them, these newcomers were agricultural workers of a different caste. Many came to work on the railroads and moved into agricultural work and logging as opportunities closed to them. By all accounts, they were valuable workers, willing to endure harsh conditions and repetitive tasks for roughly $1.50 per day.

In 1906, T.C. Mazoomdar, a student at UC Berkeley, commented in the Oakland Tribune: “It is because of the inability of the Hindu laborer to conform to the customs of other countries that he should stay in his own land. The Hindu laborer is industrious and a hardworking man and his habits are good, but he is not appreciated in the United States and Canada. He is extremely orthodox in his religion and dislikes very much to abandon his customary dress and habits of life.”

At Camp 10, 35 Indian laborers were hired to plant eucalyptus trees. Clare Coombs Wilsey, daughter of William Coombs, noted that her father brought Hindus into the Comptche-Melbourne area to plant eucalyptus. Perhaps this was the same group who worked at Camp 10?

In 1976, Elise Pimental noted in Mendocino County Remembered, “Whenever mother would see the Hindus, she’d make us kids come inside the tent because she was scared of them, was afraid they’d bother us. That was out at Longvale. There were quite a few Hindus. […] They were tall and they had long beards and turbans. They all seemed friendly. They just wanted something to eat, and my mother would feed them and they’d leave. […] The Hindus were hiking just like these hitchhikers now. They were just going from place to place where they could get something to eat. […] There used to be lots of them around. It seems like they just disappeared.”

The disappearance Pimental noted was a result of growing discrimination which drove them from California. Like the Chinese and Japanese before them, the Indians were victims of the success and visibility of Asian workers, and targeted by similarly restrictive laws. Set apart by dress and customs, when they adopted American ways, they risked ostracism and possible death by their countrymen.

Headlines from the 1910 San Francisco Call included warnings that “Orientals Flock to the State” which vied with advertisements for “Hindu Turbans”—women’s hats in Persian silks and pongees decorated with fancies of feathers and quills. Opposition to the newcomers in the Ukiah newspapers followed a pattern of vehemence spreading across the state.

By 1913, as Rabindranath Tagore, the renowned Indian poet, won the Nobel Prize for Literature, many of the Indian workers had already packed their bags and returned home, sent off from San Francisco ports in a confetti of coins thrown dockside for good luck. By 1920, the census noted the entire Hindu population of Mendocino County as one.