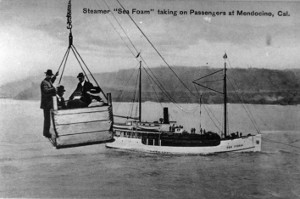 In a box of historic resources I was recently given, I found a reprint of a feature story about Mendocino County. It appears to be a magazine piece, extolling the virtues of life in this area, 123 years ago.

The article promised: “A region worthy of the closest attention of the traveler on a pleasure bent, the capitalist in search of opportunities with the certainty of royal return, and the agriculturist or stock grower.” The main excitement of the time seemed to be the prospect of coal production at the headwaters of the Eel River. There were rumored to be extensive deposits of the valuable commodity present there.

Hopes were high that the resource could be developed, with rail lines extended to “the coal fields.” Investors were being actively sought, with a plan to supply the fast-growing demand for coal in the San Francisco Bay region. The population there was expanding, along with the need for heating fuel. At that point, railroads had reached Ukiah and it was hoped that Southern Pacific Railroad “will ‘ere long extend their Capay Valley line through Lake County in to Mendocino, tapping the redwood belt and the coal fields.” But, the grand plans all came to naught, as it eventually emerged that the coal fields did not exist.

The article features long discussions of the projected future of agriculture in this county: “Mendocino County is one of the foremost wool producing regions of the state, and many a fortune has been made in this industry.” As we might say today, that’s putting a positive spin on it. Also, “Hops, potatoes, oats and barley are favorite crops; whole apples, plums and prunes are cultivated with best possible results.”

Ukiah was described as featuring a new, three-story brick hotel (the now-derelict Palace Hotel) and an abundance of churches “with their spires being seen in every direction.” The writer also claimed “immense shipments of wool, wood, tan-oak bark, hops, fruit, butter, and leather were made south by rail and the farmer who is not prosperous has only himself to blame.”

The writer also made comment of the native children seen in his travels around the region, along with adults “too old to take kindly to modern customs…sitting in front of a primitive wickup.” The writer commented on the Round Valley Indian Reservation thus: “…a locality made famous, or infamous rather, from the means by which large tracts of the finest lands have been obtained by certain methods which will scarcely bear investigation.”

Mendocino village offered steamer ship travel but that was deemed “both novel and not at all reassuring to weak-nerved people. From a derrick a sort of box is lowered by a rope, crowded with as many passengers as can stand, and thus suspended people can be swung on shore or onto decks of ships. While no accidents have happened yet, one experience of this kind of landing is usually enough for a lifetime.” A marked peculiarity of the time was the fact that the south side of main street had buildings painted red, and the on opposite side the color scheme was much lighter: “The effect is very odd.”

For a long time, dreams of coal production persisted. It was proposed that the rail line to be built to the Ten Mile timberlands be “extended to the coal fields in Covelo.” Fort Bragg got little notice, but Usal’s mill “gave every promise of being the best-equipped on the Pacific coast.” Bear Harbor was doing quite a business in (railroad) ties and tan-oak bark. Westport featured “not a stage line but a ‘buckboard’ line going east where a 25 mile trip takes all day.” Cuffey’s Cove was recognized for the excellence of the potatoes grown there, and Manchester excelled in butter production.

The original article was written in 1895, and the writer was unidentified in the reprinted version. But his impressions and opinions are numerous and descriptive: “The amount of driftwood on the beaches is astonishing. Beaches are covered with great redwood logs considered valueless, but with cordwood bringing such high prices in the city, it is believed that some good use could be made of the now-wasted timber.” As a whole, the writer liked what he saw here: “The prospects of the county are brighter by far than at any time in her history and it requires no stretch of the imagination to prophesy a future of unexampled prosperity and progress.”

It’s fun today to read about how the outside world viewed our area and the lives of our people 123 years ago. This old article, complete with scenic etchings, reads like something our tourism organizations would produce today.

More stories like this can be found in the Kelley House Museum archives. Call 937-5791 for more information.