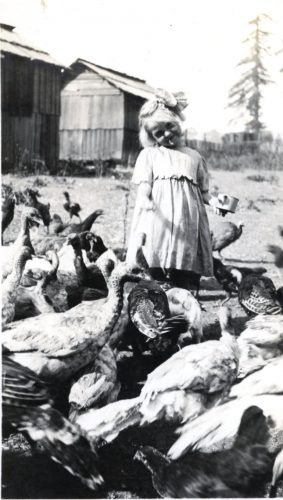 The last native turkey of California (Meleagris. californica) foraged here more than 10,000 years ago, and what we know of it comes to us only through the fossil record. It disappeared probably due to climate change. Had you wanted a Thanksgiving turkey more than one hundred years ago, you would have bought one or raised one of your own. The native bird, where it did occur, had been hunted so aggressively that only an estimated 30,000 birds remained in North America. Today, wild turkeys number around seven million and thrive in every state but Alaska.

Mendocino County is naturally suited to the raising of turkeys due to its wooded areas, open grassland, and plentiful food. By the early 1900s, the county was producing and shipping large quantities of domesticated turkeys to urban areas. In November of 1907, eleven tons of locally raised and dressed turkeys from Mendocino and Lake counties were shipped from the Wells Fargo & Co. office in Ukiah to San Francisco for further distribution, and the county’s turkeys were noted for their toothsome qualities. Recommended as a great boon to local ranchers and farmers, who paid nominal sums for its care and keep, the bird was considered highly profitable due to its efficiency as a forager.

On the belief that wild turkeys could thrive within the state again, the Department of Fish and Game began the bird’s reintroduction by releasing 22 birds into the San Bernardino mountains. Initial attempts failed, but through a series of successive releases and careful breeding of hybridized birds in captivity, more than 3,350 birds were released between 1928 and 1951 at 71 different sites within 23 California counties, Mendocino among them, but these releases failed in all but three counties: Sonoma, San Luis Obispo and Santa Clara. These turkeys lacked the necessary skills to survive.

Between 1959 and 1999, thousands of wild turkeys of five different types were trapped, released, and transplanted into Mendocino county, including Merriams, Rio Grande, Eastern, Eastern/Rio Grande hybrid, and the California hybrid. Today, Mendocino County has a well-established turkey population, and the bird is a common sight in many places and is hunted at high levels. Present in California in an area of about 29,000 square miles, turkeys are considered a conservation success story.

Though a beautiful and welcome sight to many, the Great American bird has made itself at home in a variety of urban and suburban locations, causing damage to crops and landscaping. Known to be territorial depending on the season, turkeys generally only approach humans in search of food.
Some people complain they are damaging the state’s natural biodiversity, as they eat reptiles, amphibians, and many kinds of native plants, and that they may out-compete native ground-dwelling birds for resources. They have been accused by some of the spread of diseases, such as Sudden Oak Death, though this has been disputed. One thing that is clear is that turkeys—native or otherwise—require much further study.