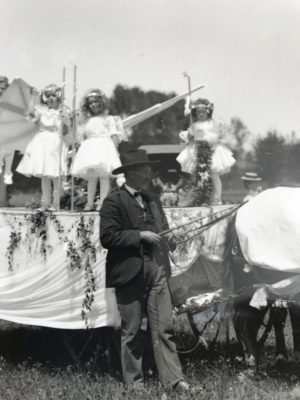 The early years of the 20th century were a time of innovations. The automobile had come to stay. People enjoyed the new fashions brought about in the wake of the First World War. With the vote, women had reason to hope that their social status would change for the better. It was also the decade during which national prohibition, or “The Great Experiment”, was underway.

In the town of Mendocino, the voting population, meaning men only, had decided to do away with liquor and its sales in advance of the rest of the country, during the summer of 1909. Many of the arrests and cases brought against those who broke the local option occurred in and around Mendocino. The prohibition against alcohol didn’t prevent people from making, selling or drinking it.

The term “blind pig” began to be seen more frequently in the pages of the Mendocino Beacon. Historically, this phrase has uncertain origins, but it is sometimes used synonymously with “speakeasy”. Decades before the advent of Prohibition and the 20th century, “blind pig” was used to describe an establishment where clients were brought in to see a curiosity. Clients had to pay a fee for the privilege of seeing a “blind” or sometimes a “striped” pig and after doing so were given a glass of spirits. This was a way around the direct sale of alcohol — folks were paying to see the “blind pig.” A speakeasy is more closely associated with the years when the nations’ citizens lived under the Volstead Act. One would approach the door of an establishment, which sometimes had a street front masking the real goings on inside, and a password or secret phrase had to be given in a low voice, or spoken softly, before admission was granted.

One of the best known “blind piggers” of the North Coast was Michael D. Nolan. Born in Ireland c. 1875, Mike Nolan immigrated here in the late 1880s to join his sister. Ellen Nolan had married Frank Lazarus in San Francisco before moving to Mendocino. Frank was the proprietor of the Mansion House on the corner of Lansing Street and Little Lake. This commanding hotel burned down on July 4, 1899, (perhaps too much of a party that year?) and was never rebuilt. When his brother-in-law left the hotel business, Mike Nolan filled in with a stage and draying service, transporting passengers and goods to the nearby camps and towns. All of this work provided good experience for the occupation for which he was best remembered: blind pigging. The column, which gave details of the troubles stemming from Mr. Nolan’s will after his death in 1937, stated: “He had many conflicts with the law, and eventually left here to settle in Sausalito. . . He had some narrow escapes from violent death at the hands of highjackers and rum runners during his residence in Sausalito.”

One of those entanglements with the law occurred in May of 1913, when “Angelic” Mike Nolan was fined $400 for “selling liquor in dry territory.” The newspaper reported that this fine represented “about the fourth time” that Mike had been penalized for similar alleged activities. In November 1915, Mr. Nolan’s name appeared in the Beacon once again, having been “. . . caught in the act of selling a bottle of whiskey to one, James Williams.” Only a few months after that, in January 1916, there were 14 indictments issued against people who allegedly had sold liquor in dry portions of Mendocino County. Of those 14, three were residents of Mendocino: Horace Nichols, Billy Grotz and Michael D. Nolan. Both Nolan and Grotz were chronic offenders. Sheriff Ralph R. Byrnes and his deputies had been doing their duty.

It is unclear as to when or why Mike Nolan received the descriptor “Angelic” before his name. It may have been due to his association with the young girls who wore wings on their backs for the July 4th parade of 1902. He held the reins of the team of horses pulling the float that day, or at least he did when the photograph was taken. Perhaps Mike Nolan was considered angelic for making alcohol available to the populace, at his own risk, during the dry years.

If you’d like to experience the thrill of a speakeasy, make plans to attend the Kelley House Emporium & Speakeasy Cocktail Party on October 6 beginning at 5:30 p.m. at Crown Hall. For tickets please call 707-937-5791 or visit BrownPaperTickets.com.