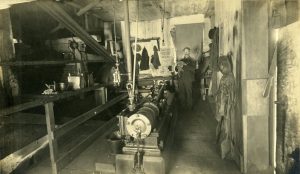 When thinking of working in a saw mill, many of us who have never done so have a tendency to focus solely on the space where logs were sawn into lumber; but there were other functioning spaces at “the mill” that were needed in order to arrive at that task. In short, it was all about getting the logs to the saws and then the lumber to the yards.

Coming across this photograph in our collection brought to mind the fairly complex process of making lumber out of logs. Human ingenuity, love of money, and technology made this possible, and it is the human stories hinted at by the details in the photographs that are intriguing. The information provided with this photograph states that this was the engine room for the incline of the Mendocino Lumber Company’s mill. It was taken in 1915.

The incline was the means of bringing logs out of the woods, across gaps and over ridges, to the mill site. Inclines were necessary to any lumbering operation located in country divided by ridges and creek beds.  The locations of inclines have been mapped (see www.mendorailhistory.org) along creeks leading into the South Fork of the Ten Mile River (those operated by the Union Lumber Company), in the woods east of Caspar (operated by the Caspar Lumber Company), and along Big River (the watershed associated with the Mendocino Lumber Company). Cars operating on tracks transported logs that were winched up by means of steam donkeys, themselves brought into place by other steam donkeys. The inclines took the place of the teams of horses or oxen that hauled logs out of the woods on watered down skid roads. The incline at Big River rose up from the flat to the headlands and Shipping Point.

Happily, names of people were provided on the back of this photograph. The man standing in the background wearing a cap and coat over his bib overalls and holding a tabby cat is engineer John Nilson. John Williams (probably John Andrew Williams) had been engineer there for twenty years. Rich Coombs, Jim Gwinn and Leslie Henry Flood, younger brother of Nannie Escola, also worked as engineers, making sure that the electric motor, which had replaced steam driven power, ran well.

Hats and coats hang on the walls, which appear to have been whitewashed. A single electric bulb hangs to the right of Mr. Nilson and the cat. A slicker and hat for those rain-soaked days hangs between what appears to be a doorway and the telephone on the wall. A poster advertises an “Entertainment” offered by the fraternal organization, “Woodmen of the World” (begun in 1890 in Omaha by Joseph Cullen Root). On a bench or work space below the poster for the “Entertainment” are stacks of what appear to be newspapers. There are cans that likely contain axle grease or oil along a shelf beside the railing separating the belted wheel from the engineers and the electric motor, which it was their job to maintain and run. The space looks reasonably tidy, but the question of the cat remains. Was this a favored pet of the engineers? Had mice become a problem? Rare as it is to have a photograph of the internal workings of the mill, it may or may not have been rare for the cat to be present.