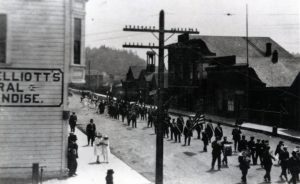 The Kelley House Museum Lawn Party and Barbeque tradition continues this year on Monday, July 4, offering the BEST parade viewing spot in town, directly across from the judging stand and announcer. This is the spot where parade participants “strut their best stuff” to impress the judges.

The party starts an hour prior to the parade, at 11:00 a.m., leaving time to claim a spot for your lawn chair or blanket. The “Mixed Nuts” will again play their unique blend of swing, Latin, calypso and jazz from 11 a.m. to 3:00 p.m., with a break during the parade.

Barbequed hamburgers, chicken sausages and vegetarian dogs will be available, as well as beer, wine, water, soda and popcorn. All proceeds benefit the non-profit Kelley House Museum. This event serves as one of our major fundraisers each year.

This Kelley House Archives photograph, from 100 years ago, shows Fourth of July parade participants marching west down Main Street in Mendocino.  This image was taken from the second story of the bank building (now Out of This World) on Kasten and Main Streets, and shows the buildings that then existed on the south side of the street belonging to the lumber company. Further east, Mendocino’s first firehouse is shown, with the bell on top. Note the sparse crowd of viewers on the street. The event seems to have grown in popularity over the past hundred years.

In some ways, the world seems not so different 100 years ago. World War I was in full swing, though the US would not enter it for nine months, and Woodrow Wilson was campaigning for reelection as president with the slogan he had “kept us out of the war.” We had invaded the Dominican Republic and just a few months prior to July had sent 12,000 US troops into Mexico, in pursuit of Pancho Villa, after his raid into New Mexico. The National Park Service was established and the Migratory Bird Treaty between the US and Canada was signed. John D Rockefeller became the world’s first billionaire.