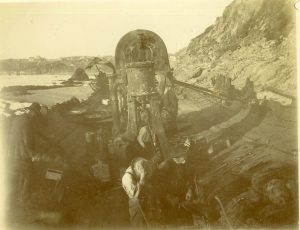 On a quiet morning in October of 1900, the steam schooner, Sunol, burned to the waterline while at anchor in Little River.

Built in 1890 in Alameda by the Pacific Shipping Company of San Francisco, the Sunol was 132’ long with a 33’ beam and a carrying capacity of 258 tons—the equivalent of 375,000 board feet of timber. It took just 68 days to build her from the time her keel was laid to the day she rolled down the ramp and into the water. One of roughly 225 steam schooners used along the Pacific Coast during the 19th and 20th centuries, she was in service for a decade before tragedy struck.

The Sunol arrived in Little River on Monday, October 23rd, ready to pick up a cargo of railroad ties bound for San Pedro.  Getting a jumpstart on the next day’s work, a few slingloads of wood were stowed aboard ship with the expectation of completing the job in the morning.

At approximately 3 a.m., a coal-oil lamp in the cook’s galley exploded, spreading oil across the decks. Within minutes, the steamer’s whistle was blown, but it was already too late to head off the flames. Newspapers of the time indicate that the officers and crew grabbed what few things they could take and hurried to the deck to board lifeboats. Captain Green, who was in his cabin at the time of the explosion, found himself surrounded by flames. He escaped death by jumping from the top of the wheelhouse in his nightclothes, landing on the lower deck and injuring his leg.

Due to calm seas and a location near the bluff, all the men made it to safety, but the initial cargo of 180 railroad ties was destroyed as the boat burned, beaching itself later that morning where it was observed still smoldering at 10:15 a.m.

Was the Sunol a victim of bad luck? Possibly. Her machinery belonged to an earlier ship, the 93-ton Mendocino, which went aground on Humboldt Bar in 1888.

A few weeks later, when the boat, National City, pulled into San Francisco, it carried so much wreckage from the Sunol it looked like a wreck itself. Damage was estimated at $25,000 to $30,000. At the time of the accident, the Sunol was the property of C. A. Hooper and  Co. and was reportedly uninsured, according to an article in the Mendocino Beacon, October 27, 1900.

A later account from Edwin H. Percy suggested that part of the Sunol appeared once again, this time in 1901 when its engine was dragged by barge to its new home at the Hardy Creek sawmill in Westport. According to Percy, the boiler alone was 12’ in diameter and 12’ long and too heavy to be moved by wire chute. Applying local ingenuity, the crew plugged the tube holes in the boiler tank with redwood plugs, threw it overboard, and rolled it into position a quarter of a mile away using a logging donkey.

An alternative account of the demise of the Sunol suggests that the crew was enjoying shore leave carousing at one of the Coombs and Stickney Company lumber Company saloons when a northwest wind rolled her at her moorings, knocking over a lantern. In this version, Captain Green smelled smoke and narrowly escaped with his life save for his injuries.

Which version seems most likely? We’ll leave that to you to decide.