Friends in Life . . . and in the Archives

Home » Making History Blog » Friends in Life . . . and in the Archives
Previous Next

Friends in Life . . . and in the Archives 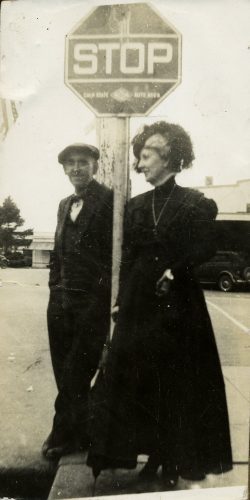 How lasting are our friendships and other relationships? Will our facebook posts exist in perpetuity? Answers to these and similar questions may not be forthcoming until we are all figures of the past.

The couple shown here, if couple they were, seem to have shared some sort of relationship. It isn’t merely the photograph which suggests this, but rather what was pasted to the back of the print which measures seven by three and one half inches. There are other clues.

What is known about the photograph is that it was received as a gift to the Kelley House Museum from Peggy Merrill in November of 2000, and that it was found in a collection of Spring family documents. The two people photographed are unidentified, but may have been friends of the Spring family.

Standing on the corner of Laurel and Franklin in Fort Bragg, the woman appears to be in period dress. She has a long skirt and a high-collared shirtwaist with mutton sleeves and rows of ruffles on the yoke. The two are at a corner with a “STOP” sign, which dominates the photograph nearly as much as they do themselves. In the background portions of buildings are visible, as well as automobiles, which suggest the 1930s or 1940s. There is a bit of patriotic bunting visible above the man’s head, on the left side of the photograph. Were they part of a Fourth of July parade?

Here’s the clincher: taped and glued to the back of the cardboard (to which the photograph was also fixed) is a printed sentiment regarding friendship. The printed graphic shows an idealized greeting between Victorian-era friends at a doorway, resembling something right out of an illustration in a novel by Dickens or Alcott. The photograph itself was trimmed from a larger image, apparently with the intent of fitting it to the printed graphic. The whole was then sandwiched together and taped on the sides with a textured tape, now gray but perhaps originally black. The following quote may be read from on this photograph’s back, copyrighted by “Buckbee-Brehm:”

If I could shape my life anew

To be as I would have it be,

I’d come to ask a loan of you

And borrow your sincerity,

With just as much of friendliness

And faith and trust as you would lend;

For what I seek is nothing less

Than worthiness to be your friend.

Visit facebook.com/KelleyHouseMuseum and make us your friend.