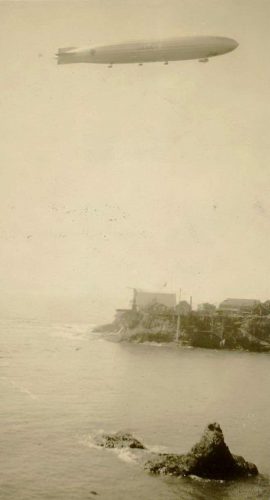 Living on the coast has its advantages and such was the case on the morning of October 17, 1924, when the mighty USS Shenandoah flew over Mendocino en route to Fort Lewis, Washington.

The first of four U.S. Navy rigid airships, the Shenandoah was built between 1922 and 1923 in Lakehurst, New Jersey, and modeled after the Zeppelin L-49.

Her infrastructure was built of Duralumin, a copper and aluminum alloy. The first airship to use helium as its lifting gas, she used air bladders made of goldbeater’s skin—part of a cow’s intestine noted for gas impermeability. At that time, helium was rare and expensive and the Shenandoah used 2.1 million cubic feet of helium—most of the world’s reserve for that time. She was powered by five 300-horsepower Packard engines.

She began her flight in San Diego and carried a crew of 44 men led by Lieutenant Commander Zachary Lansdowne. A news correspondent and a cameraman accompanied the group, making the Shenandoah front-page news across the world.

Using local amateur radio operators, the public was kept informed of the ship’s progress; and word of her arrival was first received from Fort Ross in Sonoma. By 10:30 a.m., she’d flown over Point Arena. By 11 a.m., several people who’d brought binoculars spotted the Shenandoah in the distance.

With neither a cloud nor fog in sight, the beaches of Mendocino and Fort Bragg were prime viewing locations. According to a Beacon reporter from 1924 who stood in wait with hundreds of people, “everything was dropped to watch for the flying monster of the sky.” Possibly hungry for lunch, the same reporter said, “In the distance she resembled a huge bologna sausage covered in tin foil.”

Imagine, now, that you’ve chosen a place to stand on the headlands or on the beach when you hear the steady drone of engines as this six-hundred-and-eighty foot silvery behemoth glides overhead.  At 500 feet above ground, the cabin and crew are visible. And some are waving!

Later, you might learn how lucky you really were, for, as the ship neared San Francisco around 6:30 a.m., the sleeping city was blanketed by thick fog.  Lieutenant Lansdowne radioed his regrets and bypassed San Francisco and Oakland entirely. You might hear from someone that she had hovered neared Fort Bragg for most of the mid-afternoon, as she struggled against a headwind, making slow progress at 15 mph.

What became of the Shenandoah after her brief sojourn over our beautiful coast?

She remained in service for less than a year, during which time she was put into a rigorous schedule of flyovers across the mid-western United States. During her 57th flight, on September 3, 1925, faced with bad weather and despite the insistence of Lieutenant Lansdowne that she should not be flown, desire for publicity won over concerns for safety. The Shenandoah encountered squalls over Ava, Ohio, and was torn to pieces. Lansdowne was killed along with 13 of his crew.

To learn more about the Shenandoah and to find links to films of the ship and crew in flight, here is a link to a great article with additional technical information about the ship: http://www.airships.net/us-navy-rigid-airships/uss-shenandoah

YouTube has also made available a silent film showing the ship at anchor, which includes good interior views, along with Landsdowne and his crew being raised in a basket to the loading platform.  There are also some hair raising shots of men walking along narrow girders and on the exterior of the craft!