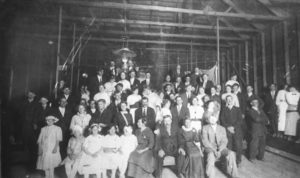 What is the appeal of a dance? Especially to the folks living and working around here in the old days, did they really need more exercise? No, it wasn’t about the exercise; it was about being amongst people, particularly people from outside one’s immediate environs. It was about getting cleaned up, putting on some nice clothes, being on one’s best behavior and maybe meeting someone new. Even if you didn’t meet that special someone, you could at least say you’d had a good time, heard some music, partook of some tempting dishes and had the chance to win a prize!

On Saturday, May 17, 1913, the residents of Comptche proudly opened their new town Hall with a weekend-long series of events. People came from miles around to eat and strut their stuff. Attendees came from Mendocino, Caspar, Fort Bragg and Ten Mile. Others made their way to Comptche from Little River and Greenwood. According to the report sent in to the Mendocino Beacon from Comptche on May 22 and printed two days later, the Saturday evening dance was “. . . the best attended affair that ever took place in the history of Comptche.” The estimated attendance was 350 people. About fifty of those came from Mendocino. The published item crowed that “. . . one young lady from San Francisco, Miss Mayme Chandon, hearing of the affair, journeyed to Ukiah and persuaded her father, C.J. Chandon, a former Comptche resident, to bring her over here in his automobile.” Others who came in cars included Superintendent Ross of Mendocino, Ed Boyle, who brought an enthusiastic group in his “machine,” and Howard Brown.

The music for the dance was furnished by the Echo orchestra, which was comprised of four pieces. The couple demonstrating the best waltzing ability was offered a large cake as a prize. There was a tie between Arnold Brown and his partner, Miss Stella Tyson, and Abe Boos, who danced with Mrs. Fred Weber. Given the tie, the cake was cut in half. Mrs. Charlee Oppenlander had produced another cake, in the shape of the new Hall. This cake was offered in a raffle, the prize being won by Lew Tyson. It sounds as though the Tyson family did well for themselves in the way of cakes that evening!

The Beacon related further that the dancing was temporarily suspended in order to serve supper. This was deemed “the great affair.” Indeed, “. . . the ladies of Comptche were praised to the skies as the fairest and best of cooks.” Sadly for us as historians, no details were given of the supper, since the person reporting said that it would require “. . . the pen of a Dickens to tell of all of the things that were there.” Having had their fill of “toothsome edibles,” the dancers returned to the floor and continued into the early hours of the following morning. Comptche’s visitors “. . . made their way home by daylight.”

As the morning turned toward noon, Finnish residents hosted a picnic. For this event, an excursion train ran up from Albion, carrying three hundred people. Another dance was given that afternoon “. . . at which ragging was allowed,” implying that a different group of musicians, and possibly dancers, were drawn to Sunday’s events. Again, a supper was served in the new Hall, this one featuring chicken.

The article ended by expressing the hope that “. . . these are only the first of many affairs that will be given in our new Hall.” That hope was realized, as the Hall is still available today for events of all kinds. It now boasts a full kitchen, restrooms and has been fully renovated. This photograph was taken at the inaugural dance. It’s apparent from looking at it that the Hall was not built on an elaborate scale, or meant to serve any purpose other than to provide a space for community gatherings.