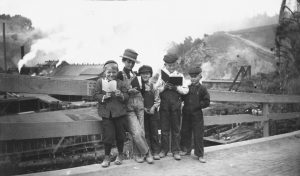 It is a privilege to work with the collections at the Kelley House Museum. Once in a while we run across a photograph which resonates on multiple levels. Such was the case with this image. Five young boys are gathered on a bridge, with a mill (probably that of the Albion Lumber Company) in the background. Three out of the five boys have reading material in their hands, and all but one, the tallest, are looking at the camera. The moment is one of mild mischief, which can be read in the boys faces. Four of the boys are in bib overalls, while the fifth sports knickerbockers adjusted below the knee. All five have covered their heads with various types of hats or caps. The tallest, wearing lighter overalls (perhaps they were more heavily worn than those of the other boys) has a dark shirt on and a contrasting, lighter colored tie. They all look as though they are ready for action of some kind. Perhaps they were on their way to or from school? Some of them might be related to each other.

We believe that the photograph was taken by Lloyd Ferrill because it was part of a donation made to the Kelley House by Jim and Judy Tarbell. The Tarbells, who owned Black Bear Press, moved their operation into the Evergreen Barn in 1985. They worked on the barn’s foundation and walls, and in the process ran across a set of photographic negatives. The processing envelopes containing the negatives had Lloyd Ferrill’s name on them. Lloyd Ferrill worked at the Albion Lumber Company as an accountant. So it’s a safe bet that the mill behind the boys was Albion’s.

Lloyd was born in 1893 to Henry Reed Ferrill and Anne Cotter Ferrill, the middle of three boys. Henry Ferrill managed the general store for the Albion Lumber Company. Lloyd’s brothers, William Vivian (1891-1981) and John Harvey, known as “Hob” (1896-1968) had their own careers on the North Coast. Lloyd Henry graduated from Mendocino High School in 1911. One of his interests was baseball, which is not too surprising, since his brother William played with the Albion Tigers. Several of the photographs taken by Lloyd and now part of the Museum’s collection show the Tigers posing in their uniforms. With photography becoming so available at the turn of the twentieth century, many people took it up as a hobby, as Lloyd apparently did.

His photographs recorded not only baseball teams and games but also outings with his family, friends and some of the scenes local to Albion. The negative for this image was in a paper envelope not unlike those found at any drug store or film development enterprise, not so many years ago. Lloyd Ferrill’s envelope was printed as a mailer, addressed to “L.H. Ferrill, Albion, Calif.”  The return address reads “That Man Pitts” 771 Market Street, San Francisco, California. The inside of the envelope indicates that Lloyd was using “Velox” developing paper. With Velox, postcards could also be printed, at fifty cents per dozen.  Lloyd’s sense of fun is apparent in many of his photographs.

Perhaps that sense of humor came through the camera lens and gave the five young boys something to enjoy for a moment. Life among the mills and millworkers in the early 1900s would have had its challenges, but how wondrous to grow up with the ocean and rivers, ranches and ridgelines as places to explore. There would have been school days and chores at home, and growing levels of responsibility as they aged. But on this particular day, they cooperated for the camera by lining up along the railing of the bridge and posing candidly.