A Medicine Show Comes to Mendocino

A Medicine Show Comes to Mendocino 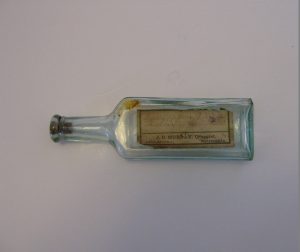 In October of 1891, a particular form of entertainment came to town. The Pawnee Medicine Company provided “free entertainments in Murray’s Hall” in Mendocino. The editions of the Mendocino Beacon for both Saturdays, October 10 and 17, included brief mentions of the show.  In the first story, readers of the Beacon learned that the Pawnee Medicine Company’s performers had begun their circuit the previous Tuesday and had “held forth to good houses every evening since.”

What was a Medicine Show and why were the names of Native American tribes invoked? Where was “Murray’s Hall” and who was Murray? Beginning with the first question, a Medicine Show was essentially a traveling commercial for questionable elixirs, oils, and more than likely alcohol-based brews of all kinds. These shows were a form of entertainment for customers, in that the folks selling the goods were particularly adept at forming and holding a crowd. Entertainers provided a distraction and bought the sellers more time to work the crowd into a state of suspense for the final moments of the show, and the “pitch.”

Why a “Pawnee” Medicine Show? One source of information notes that the desire for curiosities and thrills, rather than a respect for their cultures, brought the invocation of Native American tribal names and customs onto the stage. The Indian Medicine Shows are an example of white America’s fascination with something, which was deemed tame enough to witness, but perhaps not to fully embrace. Brooks McNamara explained in the 1995 book published by the University of Mississippi Press, Step Right Up:

“Indians had been reduced by showmen to dime museum novelties and the performances              developed . . . often concentrated on the most sanguinary aspects of Indian life.”

In the case of the October shows of 1891, there must have been an agreement between the Pawnee Medicine Company and Mr. J.D. Murray for the use of his hall. John Dayton Murray was a druggist, having come to Mendocino in 1858 from Boston, Massachusetts, his place of birth. Dr. J.D. Murray was a self-taught pharmacist, having begun his working life in Mendocino as a barber. Mr. Murray and his wife, Theresa Flanagan Murray, had five children. The family remained on the Mendocino Coast and did well. The store building, built in 1875, was located on the west end of Main Street and stocked with drugs, medicines, stationery and general merchandise. The second floor of the building was used for gatherings, meetings and entertainment.

Medicine and pharmaceuticals were not regulated then, as they are today. With the advent of the Pure Food and Drug Act of 1906, the traveling Medicine Shows began to decline. This was followed in the 1930s with additional regulation and legislation, primarily the formation of the Food and Drug Administration. But back in 1891, after their show at Murray’s Hall in Mendocino, the Pawnee Medicine Company hit the road for Fort Bragg.

Photo: This bottle from J.D. Murray’s drug store was found at a construction site in Westport.